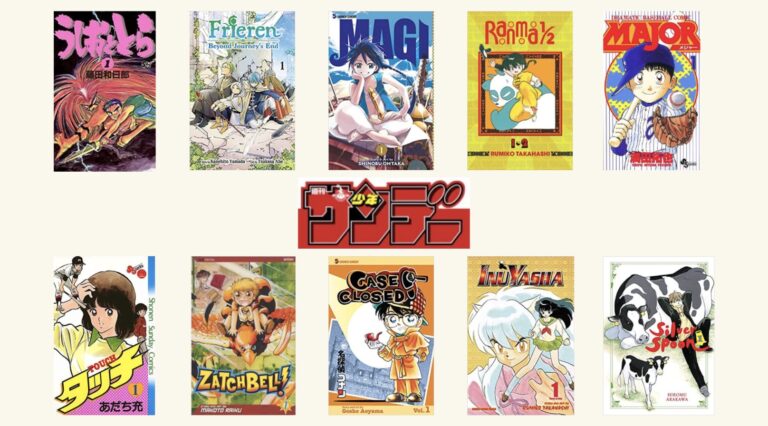 Lots of the greatest Shonen Sunday manga are also adapted into anime series for their popularity. Today, I’d like to introduce 10 best manga serialized on Weekly Shonen Sunday of all time including the legendary franchises and the recent comic books.

Weekly Shonen Sunday (週刊少年サンデー) is a famous Japanese manga magazine published by Shogakukan since 1959. It is sold every Wednesday, named after the concept for readers to feel as if they were in a joyful mood like Sunday.

In the 1980s, Weekly Shonen Sunday experienced its golden age, led by Rumiko Takahashi’s Urusei Yatsura and Mitsuru Adachi’s Touch. It achieved over two million copies in 1983, which remains the best record.

Case Closed (名探偵コナン), which is also known as Detective Conan, is the most famous and popular manga on Weekly Shonen Sunday of all time. The renowned detective manga series has been written by Gosho Aoyama since 1994. Finally, the 100th volume is on sale in October, 2021. The popular anime series has aired since 1996, and anime movies are released every year.

Inuyasha (犬夜叉) is one of the best Weekly Shonen Sunday manga of all time, serialized between 1996 and 2008. It is also known as a masterpiece of the famous manga artist Rumiko Takahashi. It was made into an anime adaptation in 2000-2004, which was followed by the second part in 2009-2010.

Inuyasha is set in the Sengoku period (around the 15th-16th century) in Japan, which a middle school girl Kagome Higurashi goes back in time to. She meets a a half-human, half-demon named Inuyasha and travels with him in search of scattered pieces of of the Shikon Jewel.

Zatch Bell! (金色のガッシュ!!) is one of the greatest manga series serialized on Weekly Shonen Sunday from 2001 to 2008. The adventure manga has been read by both kids and adults, and its anime adaptation aired with 150 episodes between 2003 and 2006.

Zatch Bell! follows a 14-year-old middle school stundent named Kiyo Takamine, who has a high IQ of over 180 but stops attending school having trouble fitting in at school. In front of him, a mysterious young boy named Zatch Bell with a read book shows up. They battle against a variety of opponent Mamodo characters to become a kind king of Mamodo.

Frieren: Beyond Journey’s End (葬送のフリーレン) is the recent popular manga serialized on Weekly Shonen Sunday, which just began in 2020. The fantasy adventure manga series has been highly appraised with the unique plot.

The story starts when a hero party defeats the Devil King at the end of a 10-year journey. It centers on a member of the party named Frieren, who is an elven girl having a lifetime for over a thousand years. She decides to set out on a new journey to get to know more about human beings.

Silver Spoon (銀の匙 Silver Spoon) is a famous manga series serialized on Weekly Shonen Sunday between 2011 and 2019. The slice-of-life and coming-of-age manga is written by Hiromu Arakawa, who is also known as the manga artist of Fullmetal Alchemist.

Ranma 1/2 (らんま1/2) is a classic romantic comedy manga series, mixed with the genre of martial arts. It was serialized on Weekly Shonen Sunday by Rumiko Takahashi between 1987 and 1996, which led the flourished age of the manga magazine.

Ranma 1/2 focuses on the story of a high school boy Ranma Saotome, who is transformed into a girl once he is splashed with cold water, and his fiancé Akane Tendo.

Touch (タッチ) is one of the most famous and popular sports manga of all time in Japan. The baseball-themed manga, serialized on Weekly Shonen Sunday between 1981 and 1986, is written by Mitsuru Adachi, who is one of the major contributors to the prosperity of the Japanese manga magazine. The manga artist is also famous for other baseball manga series including H2, Cross Game and Mix.

Touch tells the romance and coming-of-age story of three high schoolers: the twin brothers Tatsuya and Kazuya Uesugi and the heroine Minami Asakura.

Major presents the growing-up story of the protagonist Goro, who starts playing baseball inspired by his professional baseball player father. He aims to play on the major-league team experiencing critical injuries and family problems.

Ushio and Tora (うしおととら) is a legendary Weekly Shonen Sunday manga, serialized in the 1990s. The fantasy adventure manga is known as a masterpiece of Kazuhiro Fujita as well as Karakuri Circus in 1997-2006.

A 14-year-old boy Ushio Aotsuki finds a cursed spear in his family’s temple, which is called the Beast Spear and a tiger-shaped ghost named Tora is sealed in. The story focuses on the adventure and battles of Ushio and Tora.

Volumes: 34 (including a spin-off volume)

10. Magi: The Labyrinth of Magic

Magi: The Labyrinth of Magic (マギ) is one of the most popular modern fantasy adventure manga series serialized on Weekly Shonen Sunday after 2000. The 37 volumes were written by Shinobu Ohtaka, and its spin-off series Magi: Adventure of Sinbad was published between 2013 and 2018.

Magi: The Labyrinth of Magic, inspired by One Thousand and One Nights, follows a blue-haired young boy named Aladdin. He travels around the world as a superior magician called Magi in search of other Djinn Metal Vessels like his flute sealed with his friend Ugo, a Djinn.