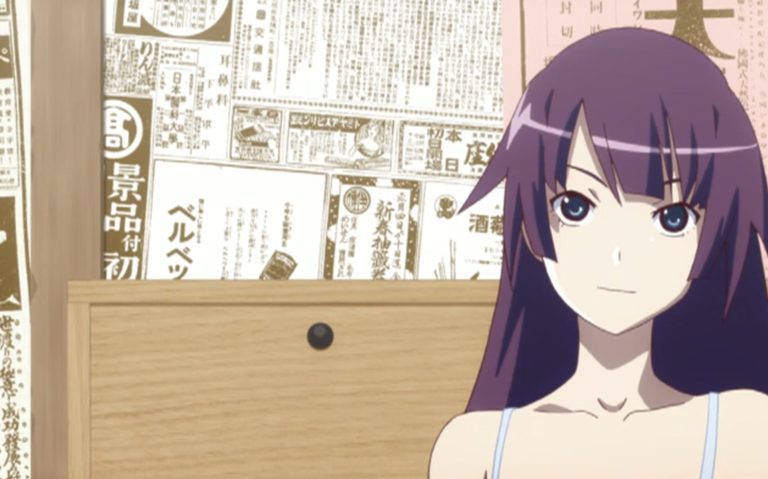 There are countless big fans of Bakemonogatari, one of the most popular anime series of all time, all over the world. This is a perfect guide to Bakemonogatari, which is the first title of Monogatari Series.

Bakemonogatari (化物語) is the first title of the popular Japanese anime series Monogatari Series, which is collectively known as Bakemonogatari. It was originally released as a light novel written by Nishio Ishin (Nisioisin) in 2006. In 2009, Bakemonogatari, produced by the famous Japanese animation studio Shaft, was aired on TV.

Bakemonogatari consists of 15 episodes, which are divided into 5 parts with 5 main heroines focused in each part. A  high school boy named Koyomi Araragi copes with lots of problems arising from apparitions that are called Kaii (怪異) in Japanese. The apparitions (like supernatural ghosts) have a big influence on the characters.

Here are introductions to all of the 5 parts in Bakemonogatari with plots and highlights below.

Hitagi Crab (ひたぎクラブ) is the first part of Bakemonogatari including Episode 1-2. It centers on the protagonist Koyomi Araragi and its heroine Hitagi Senjogahara.

One day, at landing of school stairs, Koyomi Araragi catches the body of Hitagi Senjogahara falling down from the sky, and he found out that she weights so little that she nearly doesn’t at all.

After that, Koyami tries to get to know about her well including why Hitagi almost weights by asking a classmate Tsubasa Hanekawa about her. On the hand, Hitagi doesn’t want anyone to know about her. Koyomi wonders if it is due to apparitions or something like that and Hitagi can clear the problem with a specialist of apparition named Meme Oshino’s help, who also helps him before.

Finally, it’s found out the the apparition named “A Carb of Weight” cuts off her weight.

One of the symbols of Bakemonogatari is the main heroine Hitagi Senjogahara, and it is her personality that you should pay attention to in Hitagi Crab. She looks pretty aggressive to people around her including Koyomi Araragi. However, that personality is formed by her weakness and cruel background. Yes, she is fragile and weak and tries to hide that building wall around her.

Senjogahara is also a little cynical especially to Araragi though she has kindness to him, too. Which is called “tsundere” in Japanese. Her personality consists of all of those faces.

Mayoi MaiMai (まよいマイマイ) is the second part of Bakemonogatari, consisting of three episodes (Episode No.3-5). In this story, the main character Koyomi Araragi meets the heroine of Mayoi MaiMai: Mayoi Hachikuji. They face the apparition which Mayoi is related to.

On a Mother’s day, Koyomi Araragi meets a grade school girl named Mayoi Hachikuji at Rohaku Park, who seems to get lost. He tries to help her to reach her destination, however, they can never find it, and they don’t know why. Finally, they noticed to get very complex since that is due to an apparition.

As far as I’m concerned, Mayoi Hachikuji is one of the essential characters in Bakemonogatari especially for Koyomi. The difference between Mayoi’s grade school girl appearance and her words and actions. Can you believe she is ten years old (that is not actually…)? It’s one of the highlights of Mayoi MaiMai for her to talk like a grown-up with Koyomi. On the other hand, Koyomi’s perverted sense of humor and childish behaviors to Mayoi also make the story interesting. They even brawl with each other.

Conversations between Koyomi and Mayoi are really entertaining. They chat with a wide range of vocabulary as they make a play on words. You can enjoy them even in English or other languages. The “sorry, I flubbed it” conversations using Koyomi’s family name are really funny like this:

Mr. Ararararagi san.
You added two extra “ra”s this time, you know.
Forgive me. I flubbed it.
No way, that was on purpose!
I fwubbed my wine.
It wasn’t on purpose?
Did you understand which part is funny?

Suruga Monkey (するがモンキー) is the third part of Bakemonogatari followed by Mayoi MaiMai including three episodes (Episode 6-8). This story focuses on a high school girl Suruga Kanbaru, who one year younger than Koyomi Araragi and Hitagi Senjogahara.

After school, Koyomi Araragi runs into Suruga Kanbaru, his underclassman girl with short hair, on the way to Hitagi Senjogahara’s house for studying for exams. Suruga talks to Koyomi making mention of her upperclassman Hitagi. And then, Koyomi studies with Hitagi at her house and is attacked by a demon in the raincoat on his way home.

Suruga Monkey has lots of points to see especially about its heroine Suruga Kanbaru. One is her unique personality: perverse, cheerful and funny character. Even Koyomi sometimes flinches a little for her unexpected words in conversation with him. However, her pure character makes the story highlighted.

You can see vivid horror for Suruga’s jealousy on Suruga Monkey. In other words, her deep affection for Hitagi and Koyomi. Suruga is full of slaws actually though she is a leading player among the basketball club and a star in the high school. In contradiction to her lively words and behaviors, she is vulnerable, so she relies on the apparition Rainy Devil. Nevertheless, that defectiveness is one of her attractions.

Nadeko Snake (なでこスネイク) is the fourth part story of Bakemonogatari with two episodes (Episode 9 and 10) on the heels of the third one Suruga Monkey. One of Bakemonogatari’s heroines Nadeko Sengoku shows up for the first time in the anime series.

One day in June, Koyomi Araragi visits Kitashirahebi Shrine, a small and deserted shrine on top of the mountain, with his underclassman Suruga Kanbaru to complete a job that Meme Oshino gives them. They run into a girl there, who seems to look familiar to Araragi, and he realizes that she is Nadeko Sengoku, his sister’s friend. After that, they go to to the shrine again and find Sengoku chops up snakes, which makes her involved in the apparition problem: Jagirinawa.

Nadeko Snake is the Bakemonogatari story which Koyomi Araragi’s sense of justice is represented the most storongly. Meme Oshino says “But Araragi, you tend to try to help even those you should steer clear of”, and Araragi talks back like this “Once I know about them, what choice do I have? I can’t just turn a blind eye.” That’s why the heroines including Sengoku are fascinated by him.

The scene at a book store where Araragi and Tsubasa Hanekawa talk about him and his girlfriend Hitagi Senjogahara. Hanekawa indicates him to consider Senjogahara’s thought feelings for him. She wonders if Senjogahara doesn’t a good opinion about his getting along with Kanbaru and feel a like jealous even if Senjogahara tells him to care for Kanbaru. The point is that Hanekawa provides him advice for their success in love though Senjogahara is a kind of her love rival.

Additionally, one of the most notable things in Nadeko Snake of Bakemonogatari is that Araragi and Kanbaru are perverted. However, let me leave aside their pervy problem especially for Nadeko in this story for the moment.

Tsubasa Cat (つばさキャット) is the final part of Bakemonogatari with the main theme of Tsubasa Hanekawa and her apparition “Cat”. That is to say, Bakemonogatari itself is completed with the episode 15.

There are five episodes from Episode 11 to 15 in Tsubasa Cat, however, Hitagi Senjogahara is focused on the Episode 12. As far as the 12th episode, the story proceeds with Senjogahara and Koyomi Araragi, so it can be called “Hitagi Crab part 2”.

Looking back to the incident of Tsubasa Hanekawa’s apparition “Sawari Neko (Cat)” on Golden Week (Japanese holidays from late April to early May). According to Meme Oshino, Hanekawa is bewitched by a cat on those days. In more realistic terms, it’s a multiple personality disorder. That is the manifestation of her hidden personality. That reason is what we call stress, and Sawari Neko is not going anywhere until Hanekawa’s stress disappear completely.

One day on June, Hanekawa is absent from school and calls Koyomi Araragi in Rohaku Park. He finds the cat ears on her head. And then, they visit Oshino since that is due to the apparition’s problem as well as the days on Golden Week. However, the cause of the stress this time seems to be not the same…

What you should pay attention to in Tsubasa Cat is Hanekawa’s generosity. She is not just generous but devoted. She have her affection for Koyomi Araragi apparently, however, she understands Araragi and Hitagi Senjogahara love each other. That’s why Hanekawa cannot exhibit her affection for Araragi.

She seems to try to hide her true feelings toward him. That arises her stress, which is much more substantial than that of Golden Week for her family’s problem. Tsubasa Hanekawa is a TOO good girl since she even gives him advise for the couple to do well (at the book store on Nadeko Snake) while she feels overwhelming rush of love of him.

You shouldn’t forget about the scene at the final stage where Araragi asks Shinobu Oshino to help himself for the first time. That represents a tight bond of loyalty to each other.

I also reconfirm how attractive Hitagi Senjogahara is watching the episode 12. She goes on a date with Araragi for the first time and takes him to her favorite and secret spot. Where they can see beautiful stars in the sky. They often talk to each other with jokes in a playful mood, nevertheless, she have a strong attachment to him.

25 Best Anime of All Time

40 Best Manga of All Time