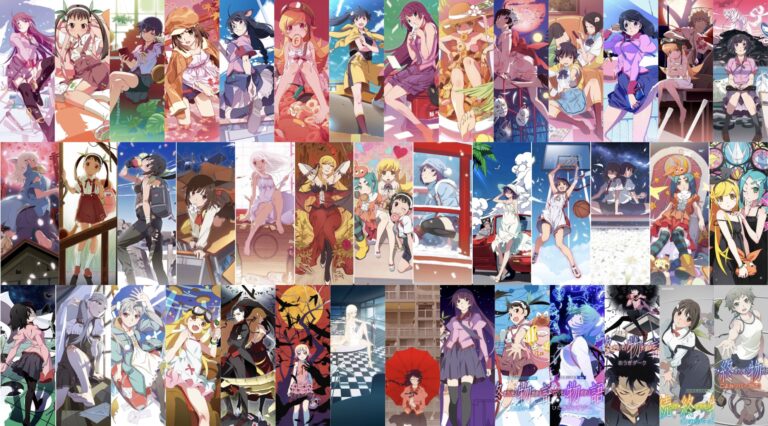 What do you think is the best anime series ever? In addition to lots of classic masterpieces that were born decades ago, more and more high-quality anime are created in Japan and distributed all over the world. Monogatari Series, which is also known as the first part’s title Bakemonogatari, is one of the greatest anime series of all time.

Based on the light novel series written by Nisio Isin (Nisioisin) since 2006, the renowned anime studio Shaft has made its anime adaptation since 2009. There are three major parts in the anime of Monogatari Series so far: First, Second and Final Season. They constitute 14 titles from Bakemonogatari to Zoku Owarimonogatari airing between 2009 and 2019, which contain 100 episodes totally. 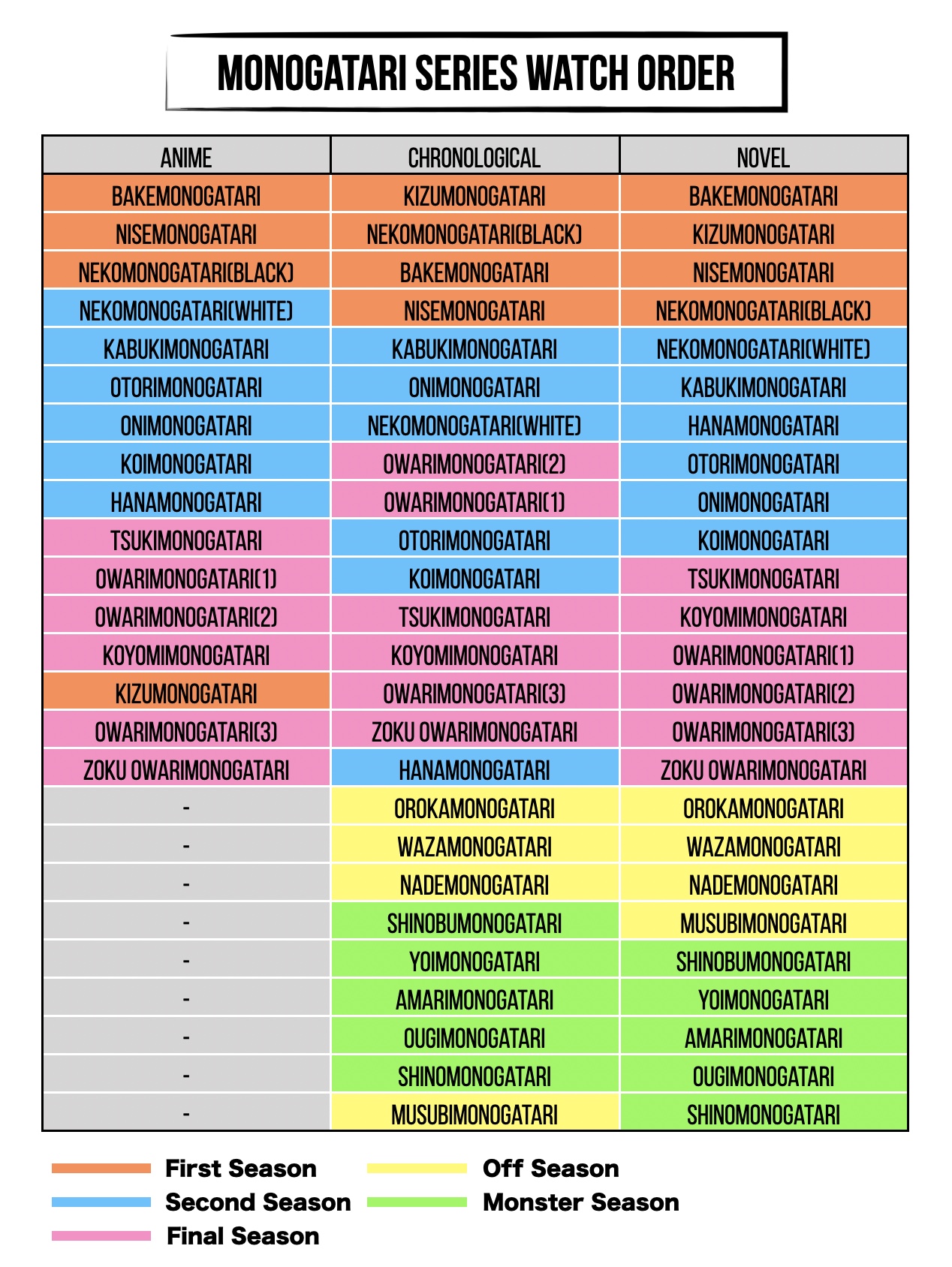 There are some popular ways to enjoy watching Monogatari series including an anime broadcast order, a light novel published order and a chronological order. To get straight to the point, the anime ordered order, made by the studio Shaft, is the best order to watch Monogatari Series.

The anime order is perfect especially for first timers, which help them to know correlations between the tales in the whole series. It’s not chronologically ordered but easy to get the storyline of Monogatari Series. 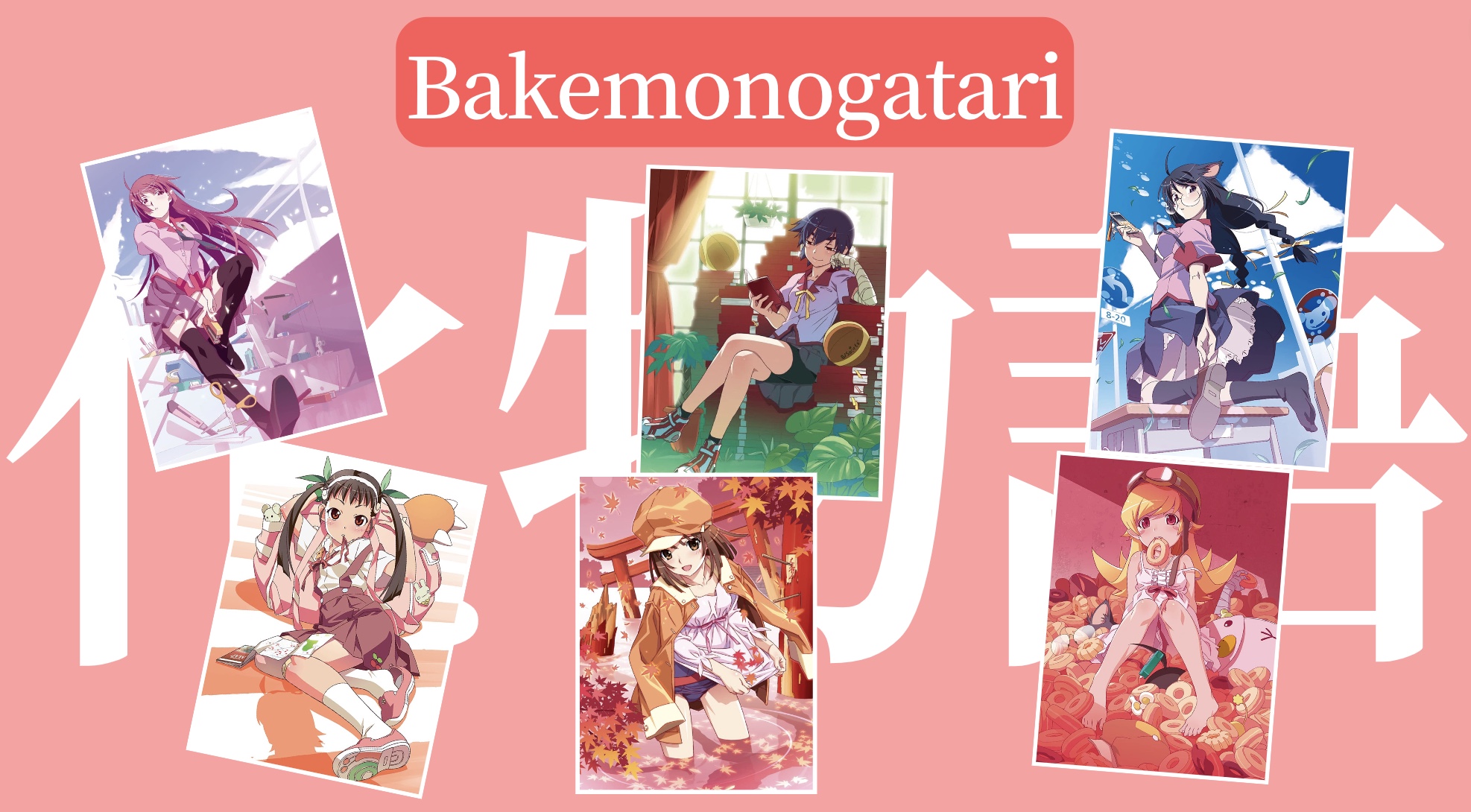 Bakemonogatari (化物語), the first title of Monogatari Series, comprises five parts that have 15 episodes. Each of the Bakemonogatari parts follows each of the titular heroines in a respectful way: Hitagi Senjogahara, Mayoi Hachikuji, Suruga Kanbaru, Nadeko Sengoku and Tsubasa Hanekawa. It also introduces other key characters such as Shinobu Oshino and Meme Oshino.

The second part Mayoi Maimai is also well known as Mayoi Snail in English, but I call Mayoi Maimai, the original title, for the avoidance of confusion since there is the title Mayoi Snail in Monster Season, which has not been adapted into the anime series.

Enjoy the first and most important part of the series in the beginning! 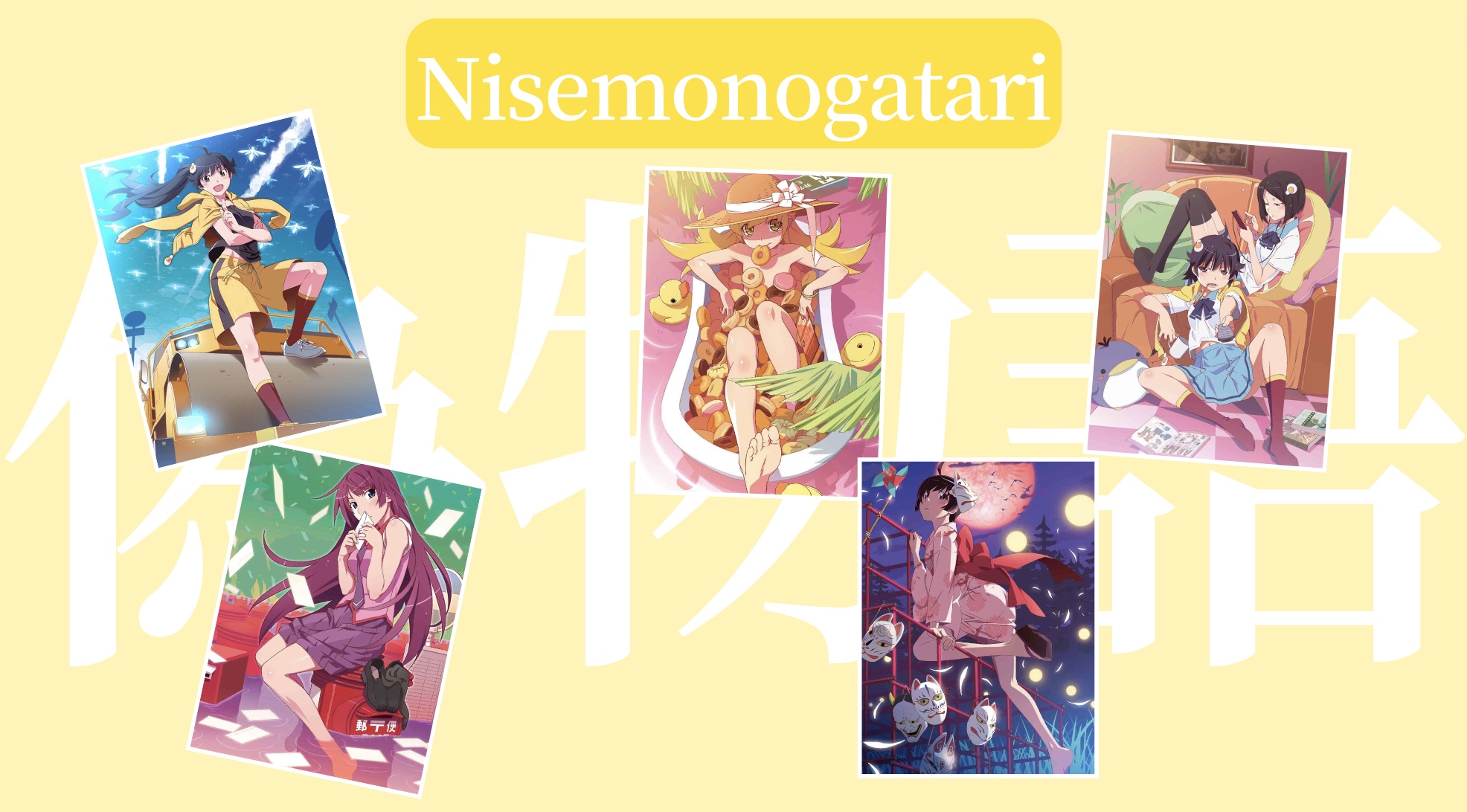 Nisemonogatari (偽物語) hit the air as the second title in the Monogatari Series first season, composed of 11 episodes. It focuses on the protagonist Koyomi’s little sisters Karen and Tsukihi, who are also known as the Fire Sisters. Nisemonogatari also introduces some apparition specialist characters Deishu Kaiki, Yozuru Kagenui and Yotsugi Ononoki. 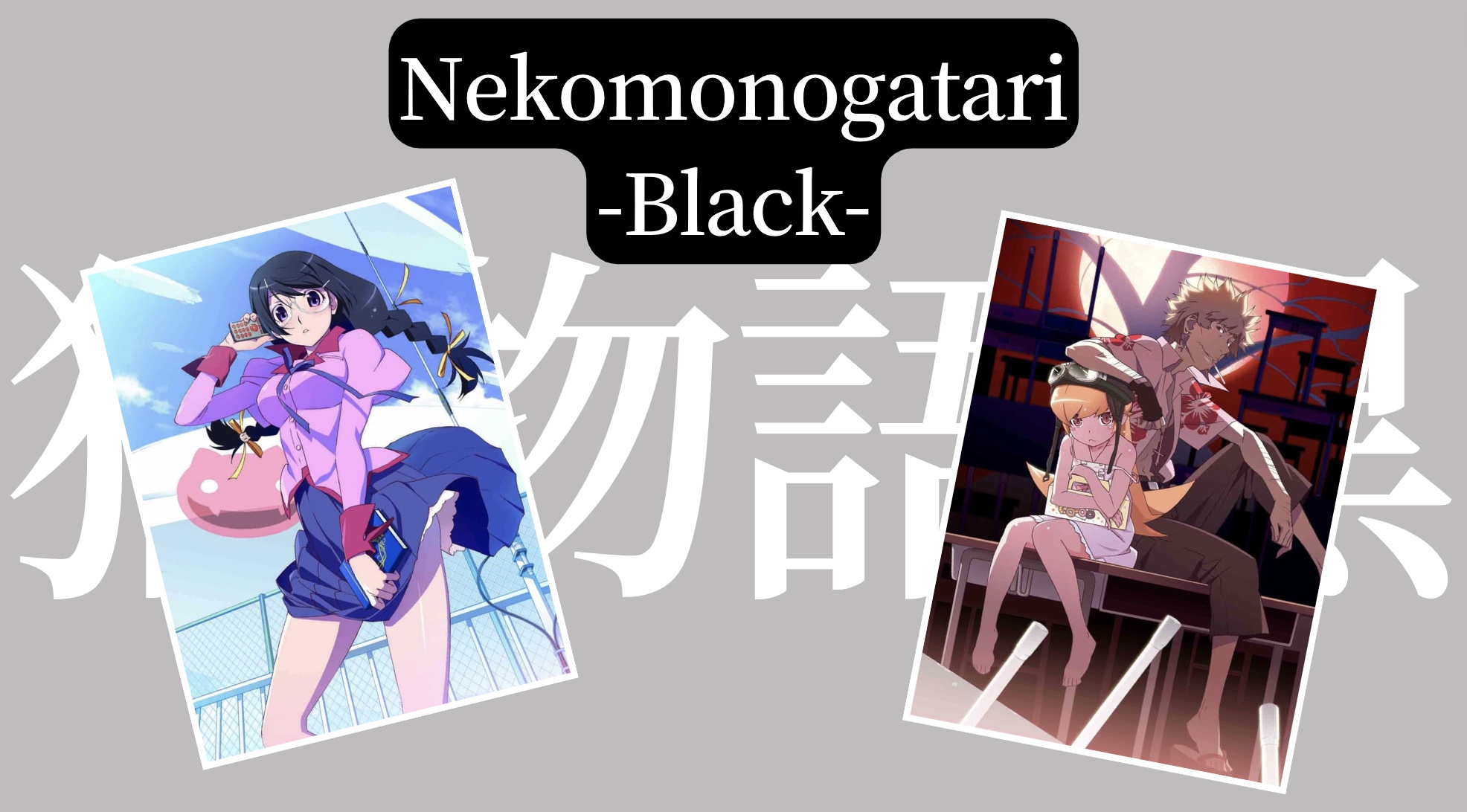 Nekomonogatari: Black (猫物語 黒) is the final part of the first season but takes before Bakemonogatari, centering on the incomparable heroine Tsubasa Hanekawa. These four Tsubasa Family episodes are set in Golden Week, series of four Japanese holidays from the end of April. That is to say, Nekomonogatari: Black is the earliest part in the first season but you can understand the story after watching Bakemonogatari and Nisemonogatari to get to know Tsubasa Hanekawa and what apparitions are like. 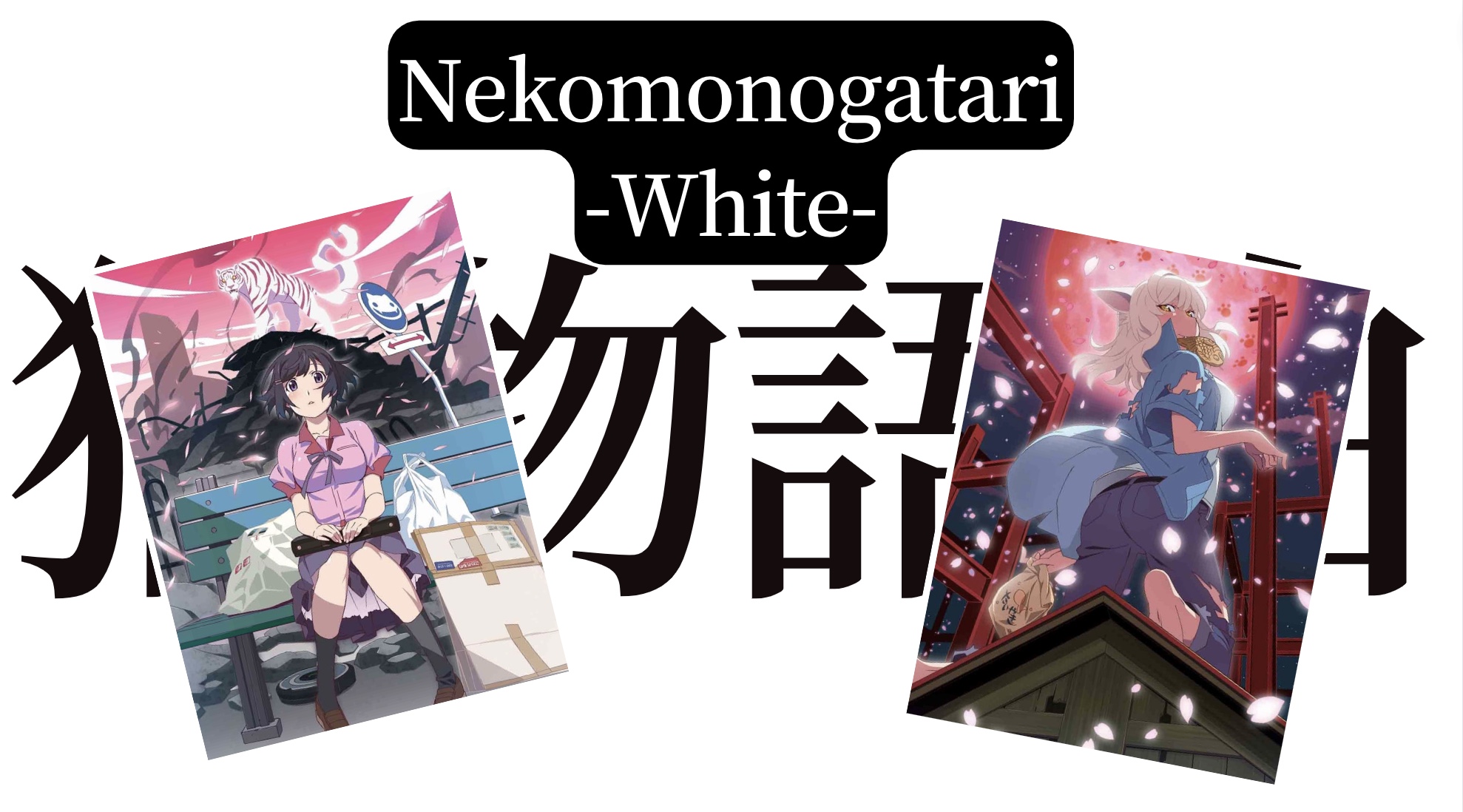 The second season of Monogatari Series starts with Nekomonogatari: White (猫物語 白), which has five episodes. Representing a serious personal problem of Tsubasa Hanekawa, it is set in the beginning of the second semester while the first season focuses on the first semester of Koyomi’s (and other same aged characters’) third year in the high school. Izuko Gaen, the leader of the apparition specialists, makes her first appearance in Nekomonogatari: White. 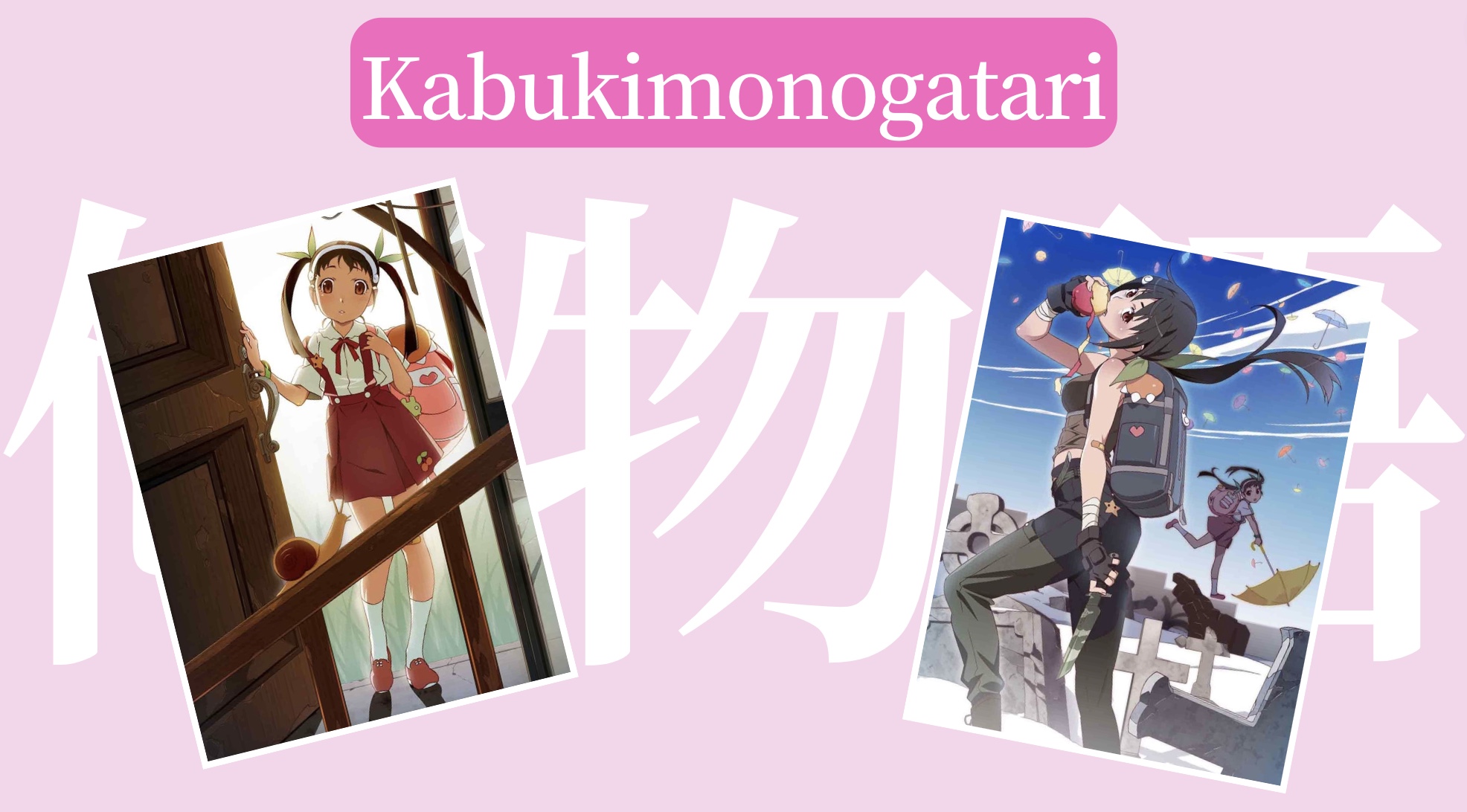 As the four-episode second title of the second season, Kabukimonogatari (傾物語) presents a sci-fi story of Koyomi and Shinobu featuring the lost child Mayoi Hachikuji. It is set in the end of the final summer vacation. Koyomi and his partner vampire girl Shinobu goes back in time to the past with her supernatural power and try to change the history to save someone. 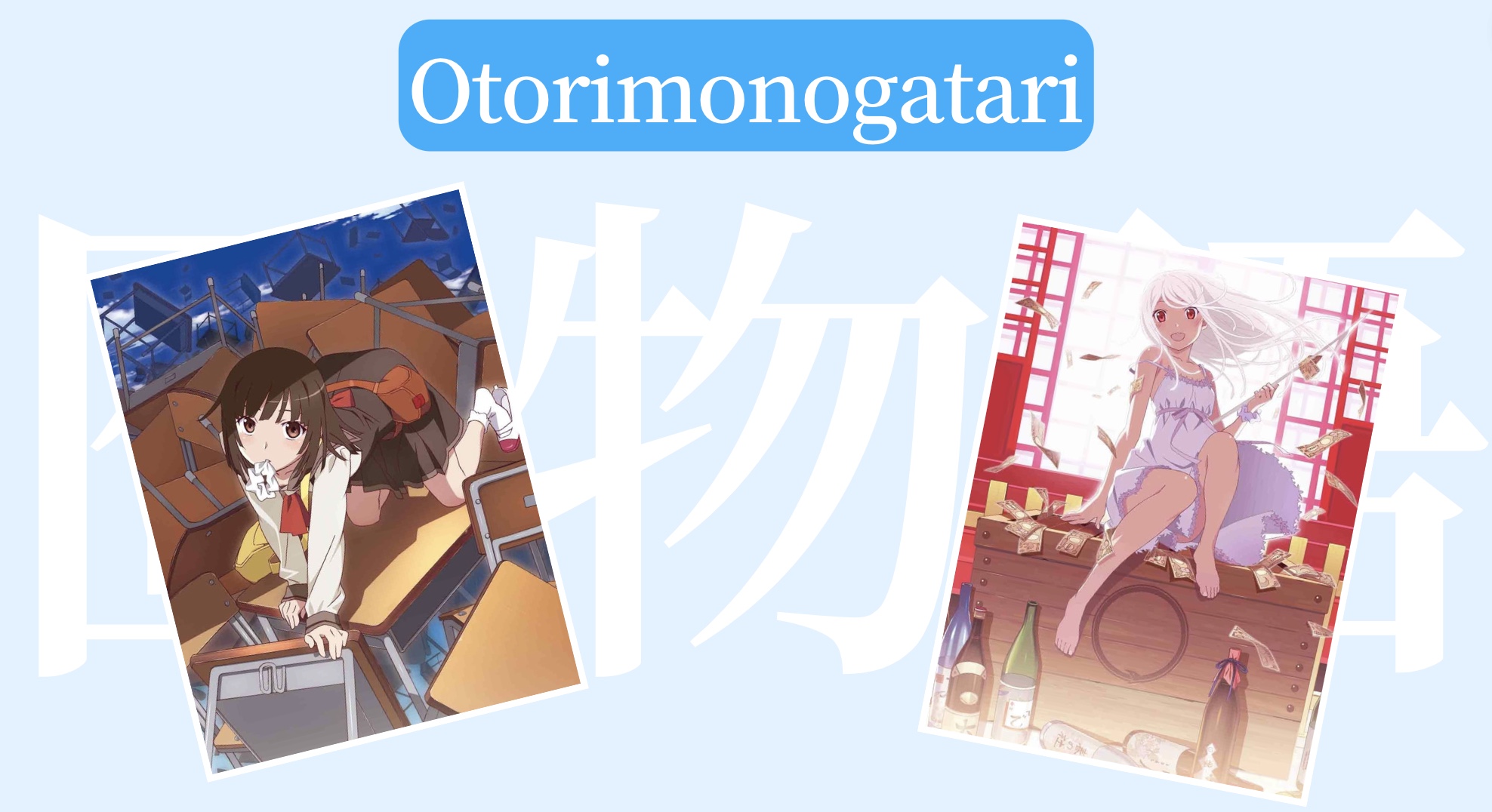 Following Nadeko Snake in Bakemonogatari, Otorimonogatari (囮物語) is the second title that concentrates on Nadeko Sengoku. It consists of four important episodes where she faces a new apparition problem. The story is intimately connected to Koimonogatari, one of the other Second Season titles. 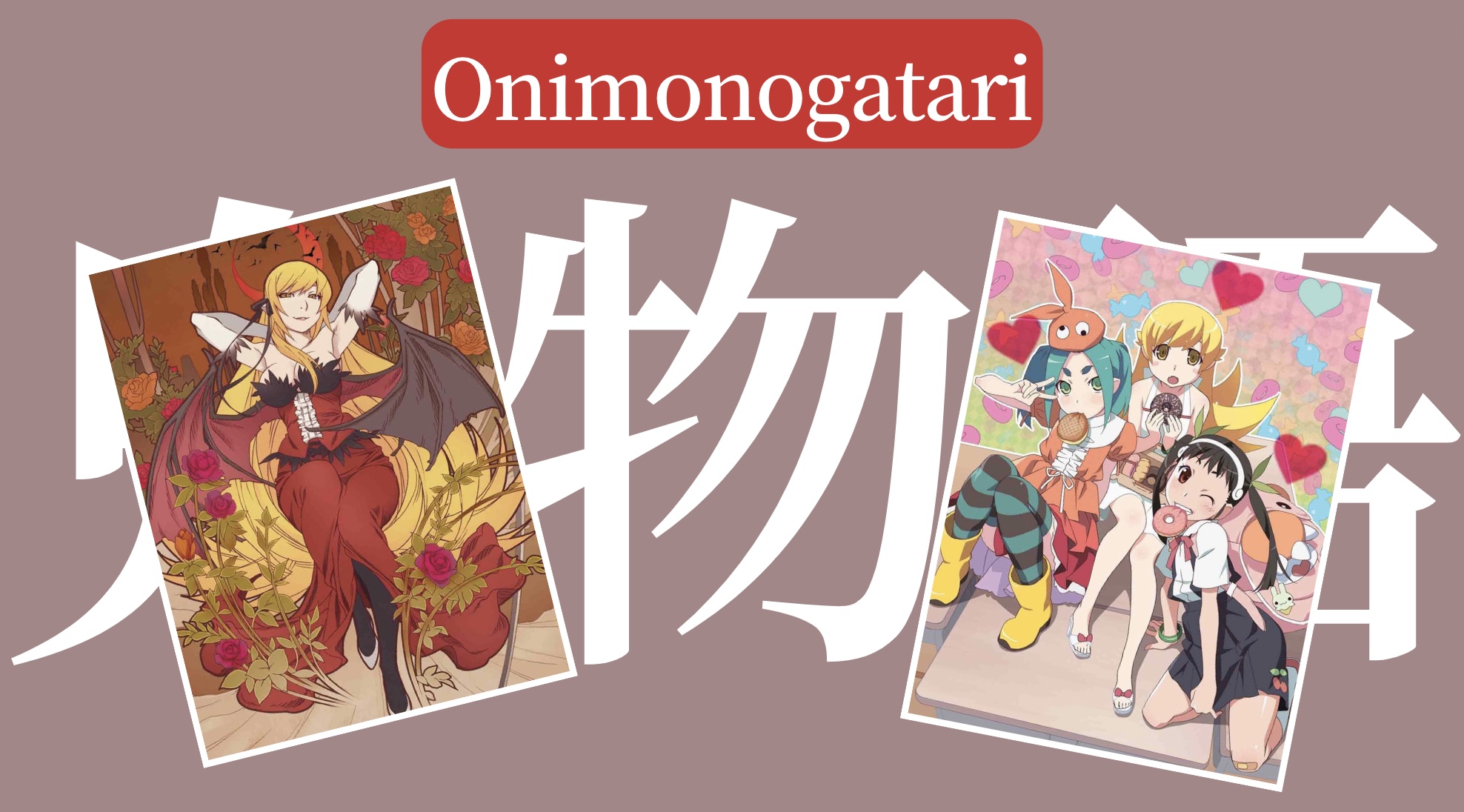 Onimonogatari (鬼物語) is the four-episode fourth title of the second season. It is set in the same day as Nekomonogatari: White putting an emphasis on the side of Koyomi, Shinobu, Mayoi and Totsugi. Koyomi and Mayoi encounter a mysterious void like a small black hole and are pursued for unexplained reasons. And, Shinobu tells her past story when she was called Kiss-Shot Acerola-Orion Heart-Under-Blade 400 years ago. 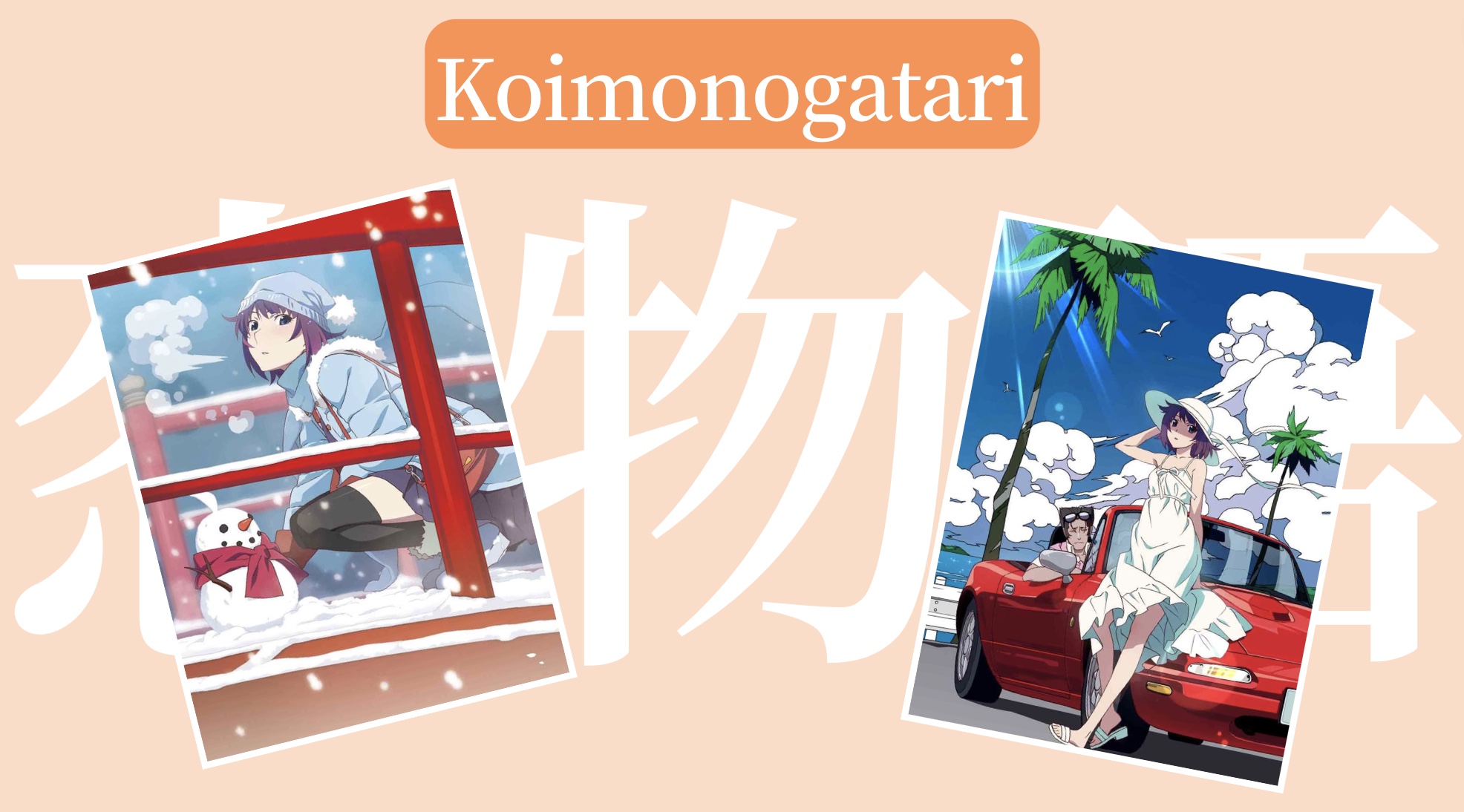 Composed of six episodes, Koimonogatari (恋物語) is the fifth title of the second season. Set in New Year’s Day, it revolves around an odd combination with Hitagi Senjogahara and Deishu Kaiki as the sequel to Otorimonogatari. The winter story play a critical role in the whole Monogatari Series though any other episodes are also indispensable. 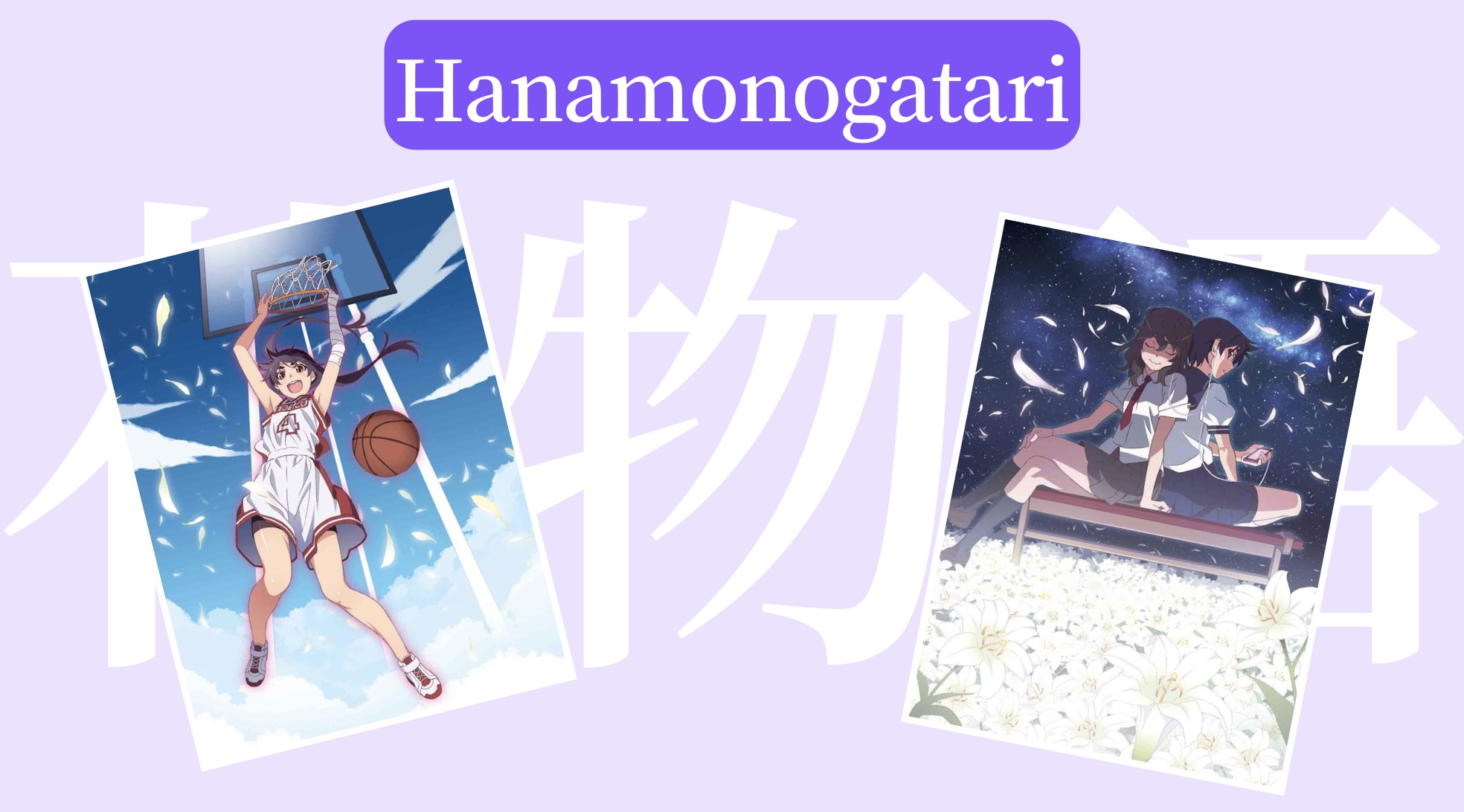 Monogatari Series Second Season ends with its sixth title Hanamonogatari (花物語), which is an almost independent episode that takes place the latest in the anime series. It emphasizes the third year of Suruga Kanbaru, when Koyomi graduates from the high school and enters a university. It is not a spin-off but touches some main issues including her monkey’s paw and lost mother Tooe Gaen. 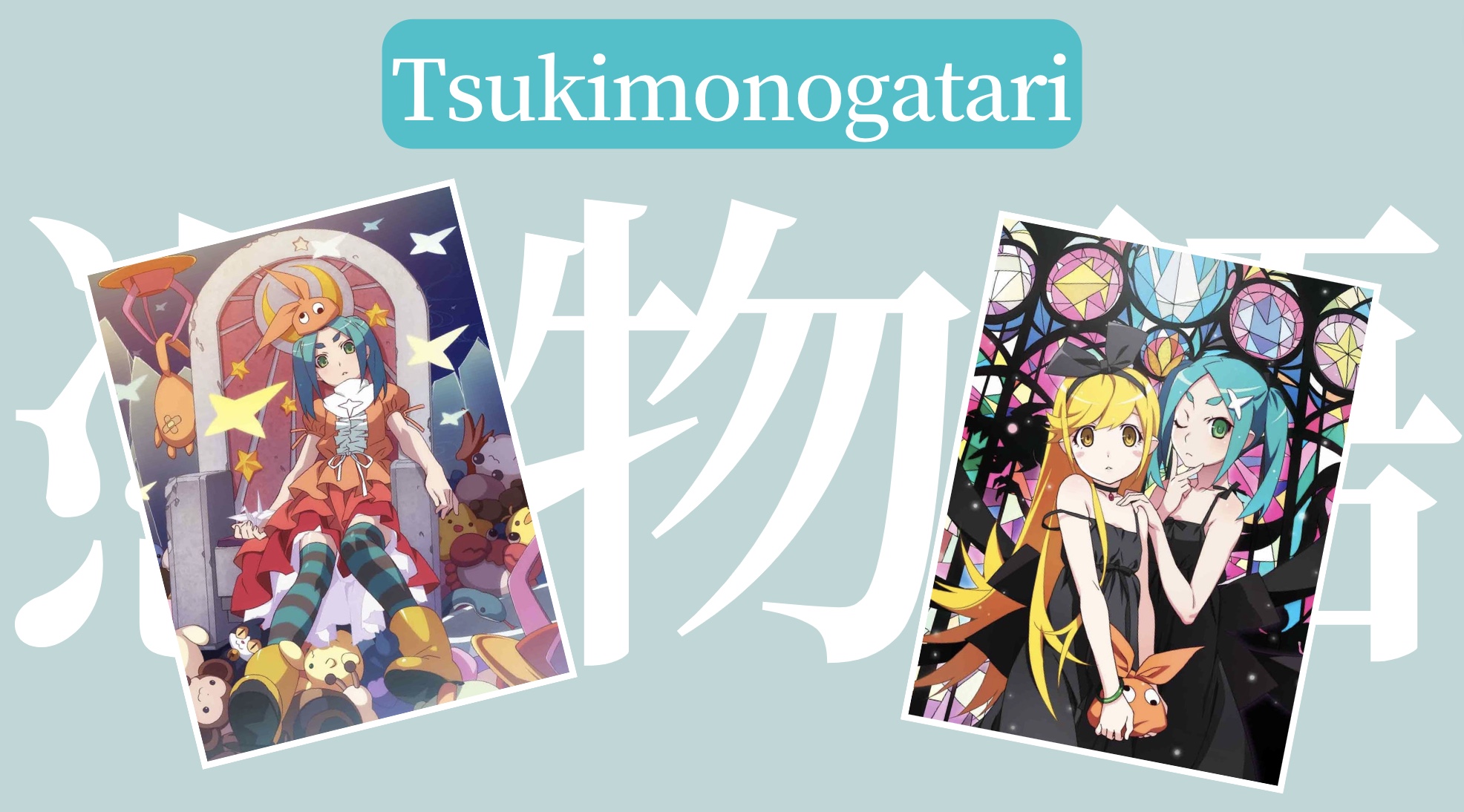 Monogatari Series Final Season kicks off with its first title Tsukimonogatari (憑物語), which is composed of four episodes. It also plays a role as the penultimate episode, next to the last title Owarimonogatari Part 3. In Tsukimonogatari, Koyomi finds out there is something wrong with his half-vampire body and try to figure out what happens to him with the help of the specialists Yozuru Kagenui and Yotsugi Ononoki. The final apparition specialist Tadatsuru Teori first appears in the series. 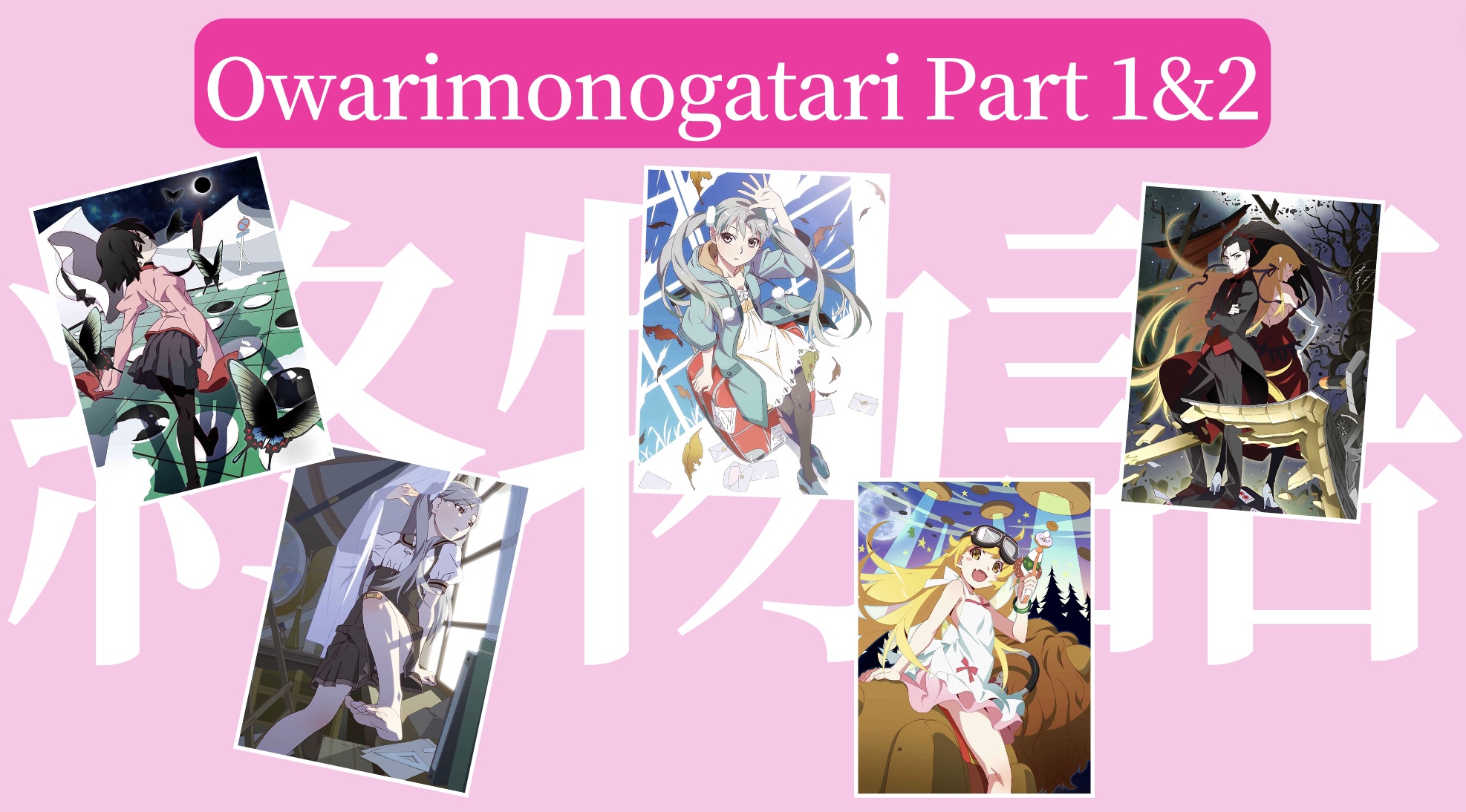 Owarimonogatari Part 1 and 2 (終物語 上・中) comprises 12 episodes that are divided into two major parts. The past of Koyomi is being revealed by Ougi Formula, Sodachi Riddle and Sodachi Lost, where Sodachi Oikura, an important character for Koyomi, makes her first appearance in the series. They take place just before Otorimonogatari according to the neat chronological order. On the other hand, Shinobu Mail is key episodes for Shinobu and Koyomi, who have a showdown with Shinobu’s first relative Seishirou Shishirui. It is the sequel to Onimonogatari in the second season. 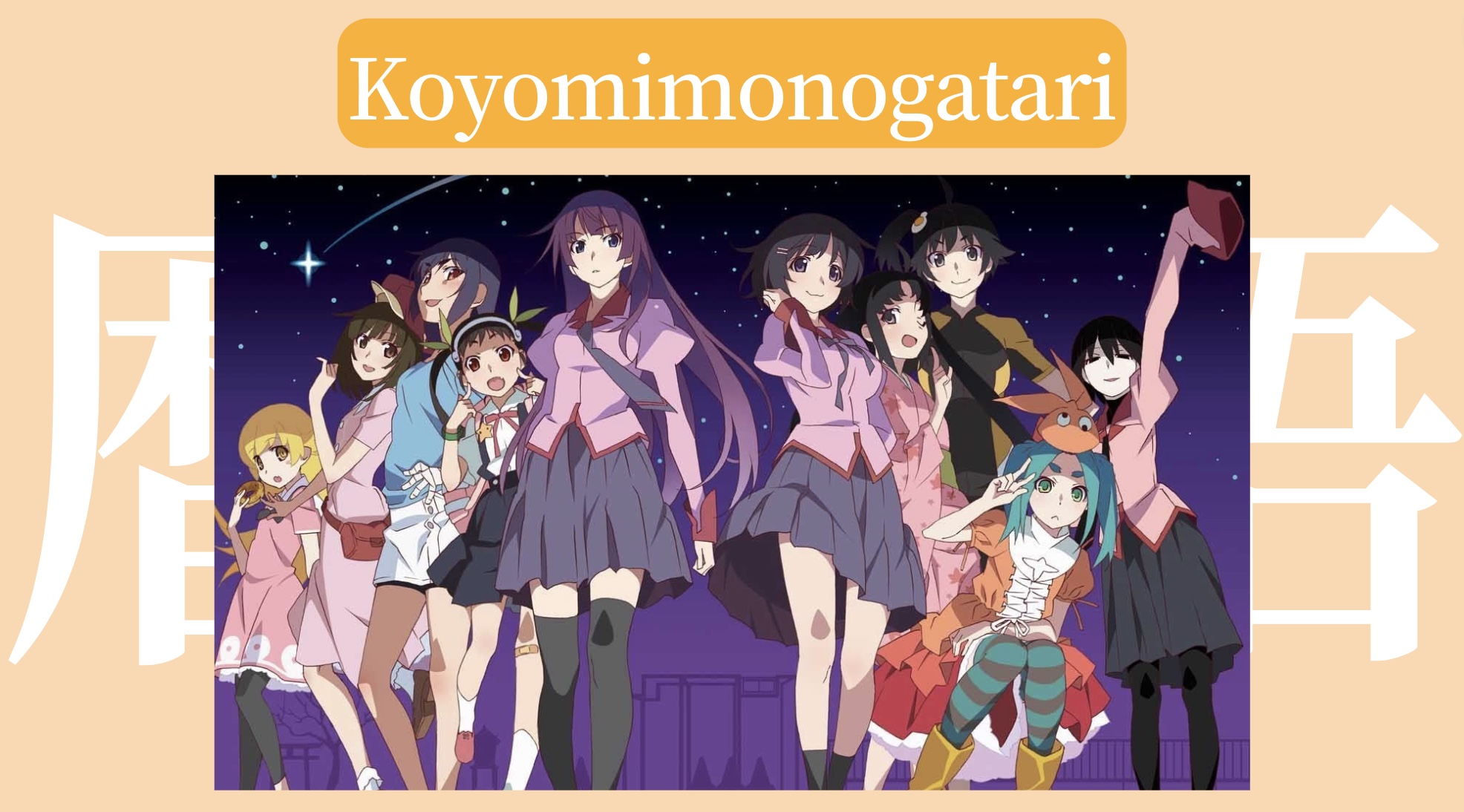 Koyomimonogatari (暦物語) centers on the titular protagonist Koyomi Araragi, which consist 12 spin-off short stories that are related to the main story. Each episode focuses on Koyomi and each of other main characters, which bridges a gap between the previous scattered stories. 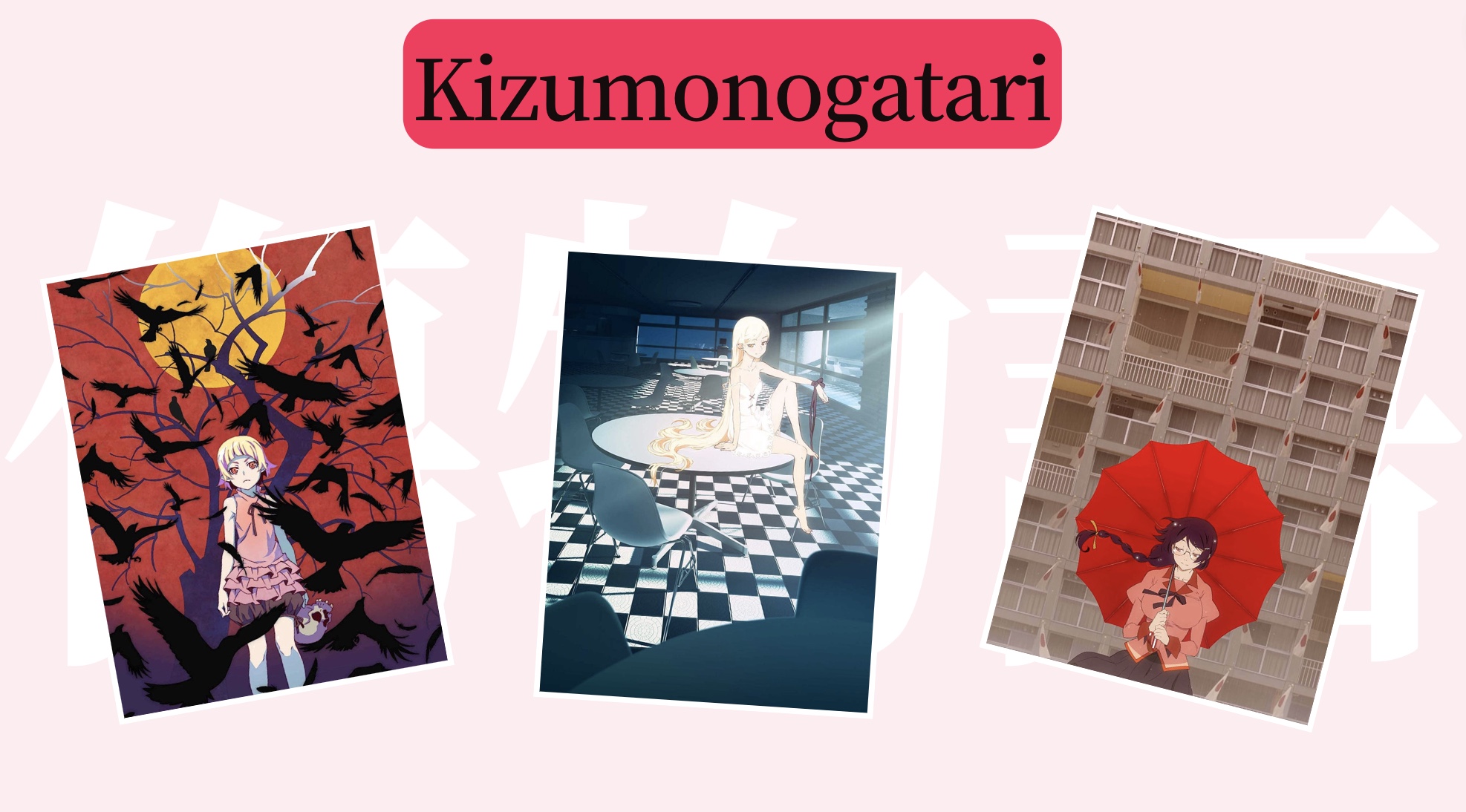 At the final stage, Kizumonogatari (傷物語) was released as a movie trilogy (Tekketsu, Nekketsu and Reiketsu). It is the very first story of Monogatari Series, presenting how Koyomi met Shinobu Oshino and was transformed into a half-vampire. You might like to watch this earlier as the original light novel of Kizumonogatari was published as the second title next to Bakemonogatari. In addition to the earliest main characters Koyomi, Shinobu (known as Kiss-Shot Acerola-Orion Heart-Under-Blade at that time) and Meme, there are three vampire hunters Dramaturgy, Episode and Guillotine Cutter in the anime movies. 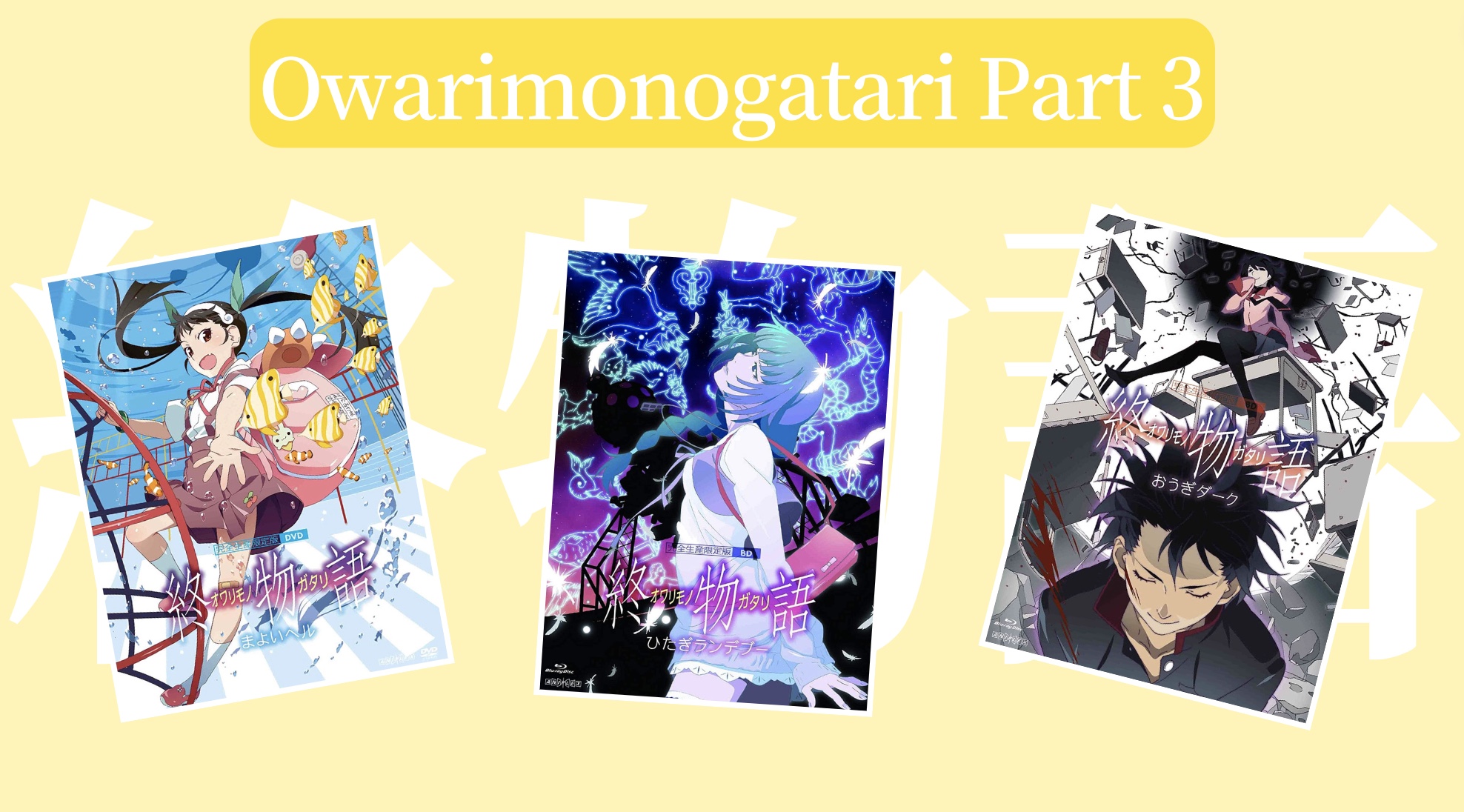 The main story of Monogatari Series is completed once with Owarimonogatari Part 3 (終物語 下). There are three parts constituting seven episodes in Owarimonogatari Part 3. The final story begins with Mayoi Hell. It presents a question of what to do about the ghost girl Mayoi Hachikuji, who should not exist in the real world. Koyomi and Hitagi dominates Hitagi Rendezvous, which is set after koyomi finishes the university entrance exam. Finally, Ougi Dark depicts who on earth is Ougi Oshino and what happens to her. Binge-watch the series until the climax of Koyomi and Shinobu. 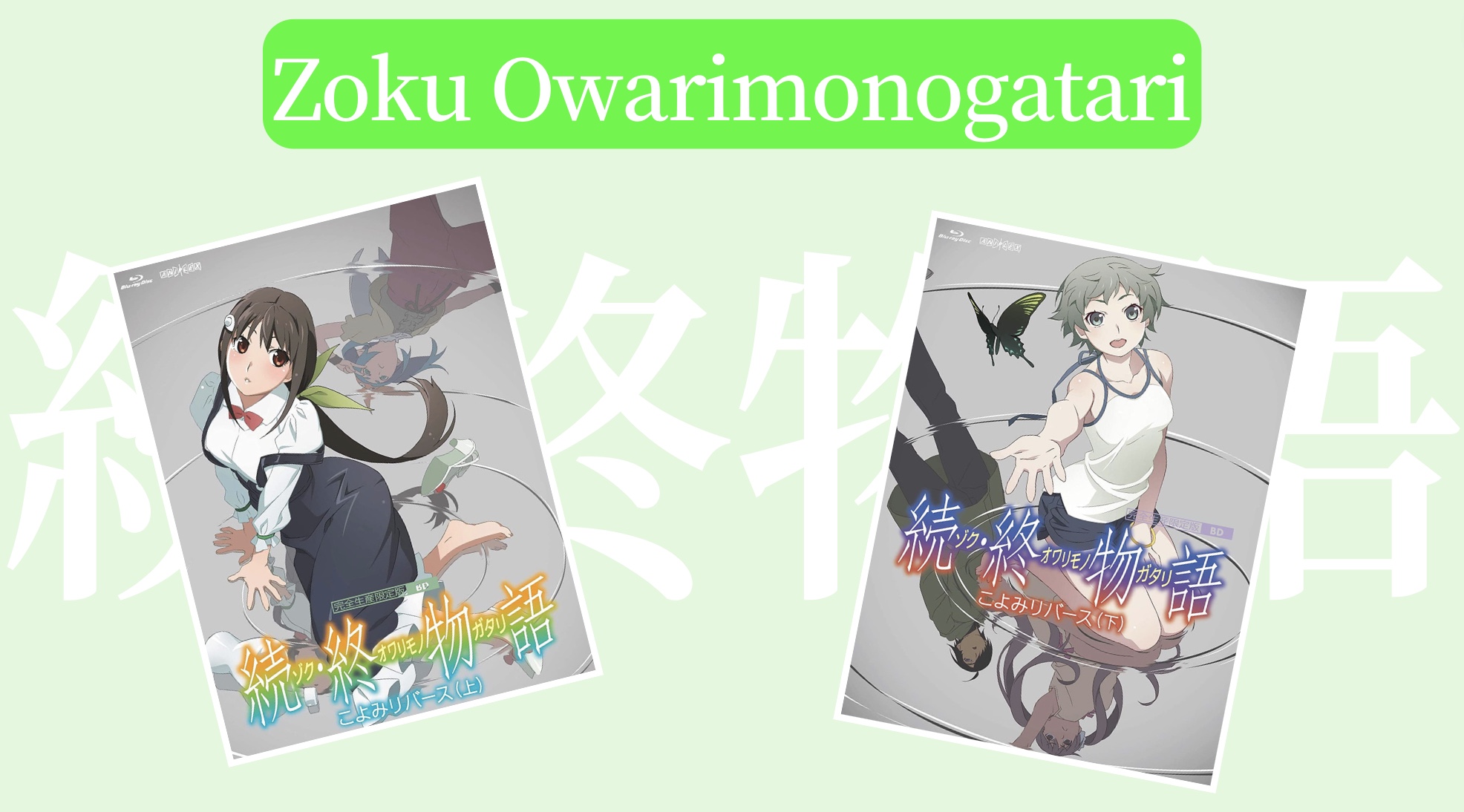 The completed final season is followed by the sequel title Zoku Owarimonogatari (続・終物語). It tells a spin-off story after all incidents are concluded in the pst titles. Koyomi is transported to a strange world. He finds there are his familiar friends and sisters in the world but something is not quite right with them. 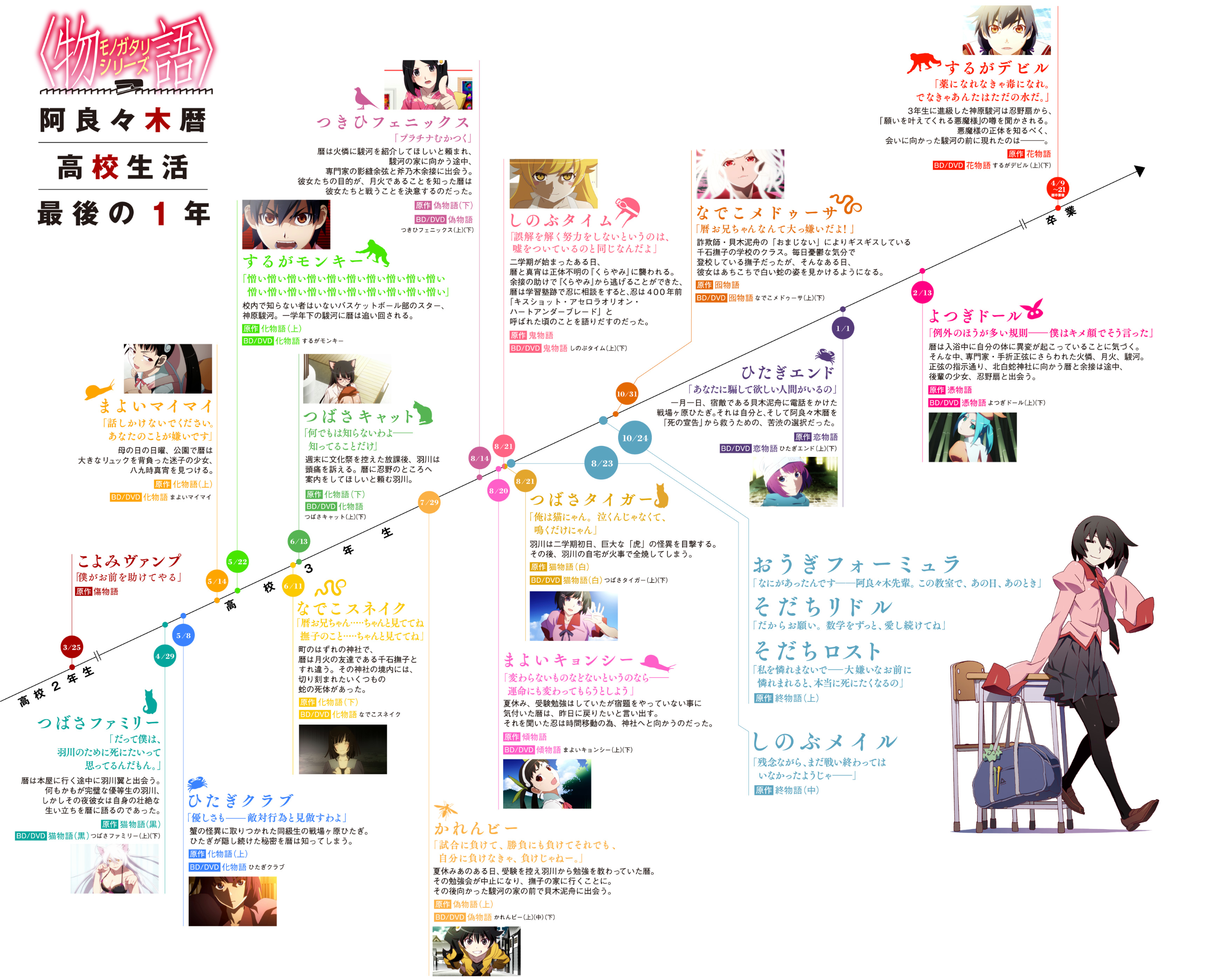 *The spin-off title Koyomimonogatari could make you all confused. It’s recommended to watch the 12 episodes at once just before watching Mayoi Hell of Owarimonogatari Part 3. This is the timeline of Koyomimonogatari:

After completing Monogatari Series in the anime aired order or the chronological order like above, it’s interesting to try this Light Novel Published Order formed by the author Nisio Isin (Nisioisin).

This article suggests why you should binge-read the Monogatari Series light novel in the light novel published order!

And, I suggest there are other ways to enjoy the renowned anime series. It is worth repeating watching some times!