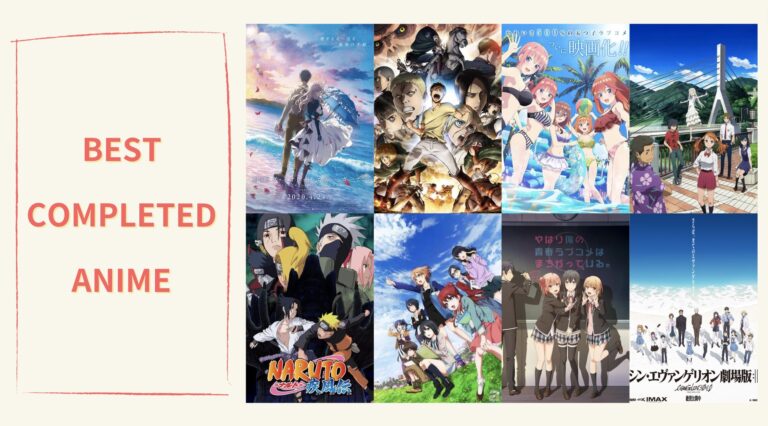 Anime is now one of the most popular entertainment contents all over the world, which has been widely watched on various platforms such as Netflix and Amazon Prime Video. Some renowned anime series has been completed with the impressive climax in the past, and others have aired with stable popularity for a long time. Providing a great deal of enjoyment, ongoing anime has a disadvantage that may be fatal for some people: Those anime series end in the middle of the story.

For those who become obsessed with the rest of the story and can’t sleep well, here is the list of best completed anime of all time. They are fully adapted from original manga or light novels from start to finish. It includes both the classic anime that concluded after long-term broadcasting for decades and the modern series that recently came to an end.

Let’s explore the authentic anime world from wire to wire!

Here is the list of the best anime series that are coming to the end before long.

Every anime fan should follow a recent anime’s icon Attack on Titan (進撃の巨人), whose original manga was serialized on Bessatsu Shonen Magazine from 2009 to 2021. The dark-fantasy anime completed its latest part Attack on Titan: The Final Season Part 2 in 2022. It has been announced that the whole story will be concluded with the final part released in 2023.

Attack on Titan begins with the sudden appearance of the intimidating titans and the totally unexpected mystery about them. Now, some of the mysteries are solved until the final season of the anime series while it’s difficult to predict the following story revolving around the protagonist Eren Yeager.

Romantic comedy is one of the hottest anime genres these days, and a recent rom-com anime series The Quintessential Quintuplets (五等分の花嫁) is about to finish with the first and last anime movie in May, 2022. Negi Haruba’s original manga series started its publication on Weekly Shonen Magazine in 2017 and was concluded with the 14th volume in 2020, which was adapted into the first season in 2019 by Tezuka Productions and the second season The Quintessential Quintuplets ∬ in 2021 by Bibury Animation Studios.

The Quintessential Quintuplets centers on a high-achieving high school student Futaro Uesugi. He gets a job as a home teacher for very rich family’s daughters for his economically poor family. It is found out that the tutees are transfer students to his school, who are quintuplet sisters. Through their daily life, the relationships between him and each of the quintuplets are changing. In the beginning of the story, it is also suggested that Futaro will marry one of them.

Here is the list of the best anime series that have been completed fully.

The mecha-themed icon Neon Genesis Evangelion (新世紀エヴァンゲリオン), also categorized as action, romance and coming-of-age, has led the anime industry all over the world since 1995, when its first television anime series started airing. In 2021, the grand story was finally completed by the director Hideaki Anno with the last part of Rebuild of Evangelion, which is also known as Evangelion: New Theatrical Edition (ヱヴァンゲリヲン新劇場版).

It’s highly recommended for modern beginners to watch Rebuild of Evangelion first, which covers the entire story of the original series and the sequel to it. It consists of Evangelion: 1.0 You Are (Not) Alone (ヱヴァンゲリヲン新劇場版:序) in 2007, 2.0 You Can (Not) Advance (ヱヴァンゲリヲン新劇場版:破) in 2009, 3.0 You Can (Not) Redo (ヱヴァンゲリヲン新劇場版:Q) in 2012 and 3.0+1.0 Thrice Upon a Time (シン・エヴァンゲリオン劇場版) in 2021. Additionally, there are two other movies released in 1997: Neon Genesis Evangelion: Death and Rebirth (新世紀エヴァンゲリオン劇場版 シト新生) released in 1997 and The End of Evangelion (新世紀エヴァンゲリオン劇場版 Air/まごころを、君に). They are the remake of the first anime series.

Evangelion presents the long story of a teenager Shinji Ikari, who is led to fight against gigantic aliens called Angels by his father. To protect the country against attacks by the Angels that come from somewhere, he pilots a large humanoid robot Evangelion. In addition to Shinji, it focuses on a teenage girl Rei Ayanami, who is also introduced as an Evangelion manipulator.

Violet Evergarden (ヴァイオレット・エヴァーガーデン) is one of the greatest completed anime series that aired with 12 episodes in 2018, which is recommended to anime beginners and people who like to binge-watch a one-season anime on weekends. The original light novel series written by Kana Akatsuki and illustrated by Akiko Takase has been also concluded with the fourth volume. In addition to the only television season, a spin-off movie Violet Evergarden: Eternity and the Auto Memory Doll was released in 2019 and a sequel to the series Violet Evergarden: The Movie in 2020.

The fantasy and coming-of-age anime centers on an emotionless beautiful girl Violet Evergarden, who survives a four-year-long big war as a human weapon losing her arms. With metallic prosthetic limbs, she becomes an Auto Memory Doll, who write letters on behalf of customers who can’t write or represent emotions as a ghost-writer. Through the work, she seeks the ultimate meaning of “I love you” that is the final words by her military superior Major Gilbert.

My Teen Romantic Comedy SNAFU presents a romance and comedy story of a pessimistic high school student Hachiman Hikigaya. He is pressed to join the school’s Service Club by his teacher and gets close to the club’s members Yukino Yukinoshita and Yui Yuigahama while he doesn’t make any effort to make friends in the school. They are asked to help various students who experience personal problems as part of the Service Club’s activities.

Many anime fans across the globe agree that Naruto is one of the best completed anime ever. The best-selling ninja-themed series was originally serialized on Weekly Shonen Jump as manga between 1999 and 2014, written by Masashi Kishimoto. The 72 volumes, constituting 700 episodes, were adapted into two parts of the anime series by the famous anime studio Pierrot. The first anime simply titled Naruto (NARUTO -ナルト-) was televised with 220 episodes from 2002 to 2007, followed by the second part newly titled Naruto: Shippuden (NARUTO -ナルト- 疾風伝) going on the air with 500 episodes from 2007 to 2017. There are also 11 anime films in the Naruto anime released between 2004 and 2015.

The great action adventure anime tells the growing-up story of the extremely unskilled ninja Naruto, who has a dream to become a Hokage, the hidden leaf village in the Land of Fire. He makes a great amount of effort to awaken his potential power, fighting against various Shinobi and training with his friends and teachers.

In 2016, its sequel Boruto: Naruto Next Generations (BORUTO-ボルト- -NARUTO NEXT GENERATIONS-), the sequel to Naruto, started featuring Naruto’s son named Boruto. It has been adapted into the anime series, made by Pierrot as well, since 2017.

Bakemonogatari (化物語) is one of the best completed anime series, adapted from the original novel series written by Nisio Isin. It is also known as the first title of Monogatari Series, which is composed of three seasons and three anime movies. The third season finished with the final six episodes of Zoku Owarimonogatari in 2019 while there are five seasons published so far in the novel series. Many fans look forward to hearing good news about the following seasons’ anime adaptations.

Bakemonogatari, mixed with multiple genres including fantasy, mystery, romance and comedy, tells the story of an academically at-risk high school student Koyomi Araragi. He has encountered all kinds of supernatural events raised by apparitions called “Kaii” since he was transformed into a half-vampire by Kiss-Shot Acerola-Orion Heart-Under-Blade, the king of the Kaii. The weird phenomena are generated around the characters who hold severe personal problems related to family, love, etc. Every story arc of the anime series focuses on each of various heroines and attractive side characters as well as the protagonist.

Shirobako is a fine original slice-of-life and coming-of-age anime series made by P.A. Works, broadcasted with 24 episodes in 2014-2015. The one-season anime has the theme of working women in the anime inductry, which has been loved by both anime fans and creators. It was followed by the first and last anime film released in 2020.

Shirobako has the theme of Japanese animation production featuring varied major jobs. It follows five fresh girls who dream to make anime: a production assistant Aoi Miyamori, an animator Ema Yasuhara, a voice actress Shizuka Sakaki, a 3D computer graphics creator Misa Todo and a screenwriter in the making Midori Imai. you can enjoy anime deeper after you look behind the anime production in this series.

The world’s famous modern dark-fantasy Tokyo Ghoul (東京喰種トーキョーグール) started with 12 episodes in 2014. After the second season titled Tokyo Ghoul √A in 2015, the last two seasons as Tokyo Ghoul:re concluded the story in 2018. All anime adaptations were made by Pierrot, based on the original manga series written by Sui Ishida between 2011 and 2018.

As the title suggests, Tokyo Ghoul is set in Tokyo, which is infested with man-eating demons called ghouls. The ghouls look like normal humans but can’t live without eating their flesh. One day, a university student Ken Kaneki nearly dies attacked by a female ghoul and is transformed into a half-ghoul to keep alive. The story represents how he suffers from his internal conflict between being a human and a ghoul.

10. Anohana: The Flower We Saw That Day

Anohana: The Flower We Saw That Day (あの日見た花の名前を僕達はまだ知らない。), which is just known as Anohana, is one of the best heartwarming completed anime series. The coming-of-age fantasy anime aired with 11 episodes in Fuji TV’s noitamina block in 2011, directed by Tatsuyuki Nagai, who is also famous for The Anthem of the Heart in 2015 and Her Blue Sky in 2019. It’s also produced by the productive studio A-1 Pictures with a renowned screenwriter Mari Okada. In 2013, the reconstructed anime movie with additional episodes came to the big screen.

Anohana is set in a countryside town Chichibu, Saitama Prefectuer, focuses on a school-refusing high school boy Jinta Yadomi. One summer day, his childhood friend Meiko Honma, who lost her life during her elementary school days, shows up in front of Jinta. He is stimulated by her to see his old friends forming Super Peace Busters after a long time while they have been estranged from each other after Meiko died.

Did you find something to add to your bucket list from above? There are some other good anime nearly coming to the end. This best completed anime list will be updated as needed!

If you are also interested in the best ongoing anime series to enjoy on a real-time basis, check this out, too!

▽Here is the list of best latest anime of 2022!▽