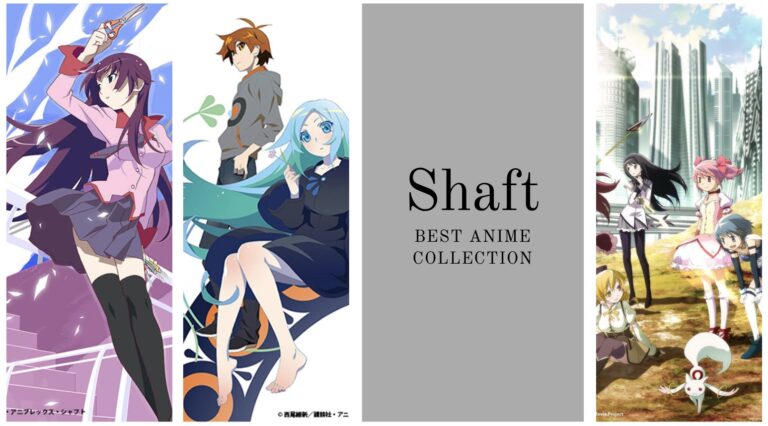 Shaft is one of the most famous Japanese animation studio founded in 1975 and its finest works have been loved by lots of both domestic and international anime fans for a long time.

The Shaft’s competent creators including a renowned anime director Akiyuki Shinbo have produced a variety of anime series and films such as Monogatari Series and Puella Magi Madoka Magica.

For all anime beginners and freaks, I’d like to introduce 7 best Shaft anime series and anime movies of all time including the famous masterpieces and less known but high-quality works.

Shaft is a well-known Japanese anime studio founded in 1975 and has created lots of popular anime series led by the anime director Akiyuki Shinbo since the early 2000s.

Akiyuki Shinbo and Shaft itself have got much more famous worldwide for their masterpieces Monogatari Series (2009-2019) and Puella Magi Madoka Magica (2011) in addition to his early works including Tsukuyomi: Moon Phase in 2004 and Pani Poni Dash! in 2005.

Monogatari Series (〈物語〉シリーズ) is one of the most famous and popular anime series produced by Shaft, based on the light novel series written by Nisio Isin from 2006. Bakemonogatari (化物語), the first title of Monogatari Series, was made into the anime adaptation in 2009.

Monogatari Series focuses on apparitions called Kaii, which have a large influence physically and psychologically on characters. The whole story of the mystery and fantasy revolves around a high schooler Koyomi Araragi, who is the delinquent student having a boring school life but is transformed into a vampire by saving a critically injured king of the apparitions named Kiss-Shot Acerola-Orion Heart-Under-Blade.

He gets involved in a variety of problems caused by the Kaii that are related to main heroines including his classmates Hitagi Senjogahara, Tsubasa Hanekawa and his little sisters Karen and Tsukihi.

Ground Control to Psychoelectric Girl (電波女と青春男) is a modern coming-of-age anime, also categorized as comedy and slice of life. It was originally written as a light novel series by Hitoma Iruma between 2009 and 2011, which was adapted into the anime series with 12 episodes in 2011 by Shaft.

Ground Control to Psychoelectric Girl is set in Japanese urban city Nagoya following a high schooler Makoto Niwa and his blue-haired cousin Erio Towa, who represents herself as an alien. He moves to his aunt’s house and comes to live with Erio forming friendships with his classmates Ryuko and Maekawa.

Puella Magi Madoka Magica (魔法少女まどか☆マギカ), the most popular magical girl anime series of all time, is one of the masterpieces of Akiyuki Shinbo and Shaft. The dark-fantasy anime including 12 episodes was broadcasted in 2011, followed by Puella Magi Madoka Magica: The Movie Beginnings (2012), Eternal (2012) and Rebellion (2013). And, a brand new anime movie Walpurgisnacht: Rising will be released by Shaft in the future. A spin-off series Magia Record started in 2020, divided into three seasons.

Puella Magi Madoka Magica focuses on magical girls who get magical powers and are required to fight against the witches in exchange for having any wish granted. A middle school girl Madoka Kaname has a high potential for becoming a magical girl but hesitates to make the contract with a magical cat-shaped creature Kyubey.

4. Fireworks, Should We See It from the Side or the Bottom?

Fireworks, Should We See It from the Side or the Bottom? (打ち上げ花火、下から見るか? 横から見るか?) is a fantasy and coming-of-age anime movie released in 2017. It was made by Shaft based on the same-titled television series aired in 1993.

Fireworks, Should We See It from the Side or the Bottom? follows three first-grade middle schoolers in a seaside town. A protagonist Norimichi Shimada and his friend Yusuke Azumi have a romantic interest in a heroine Nazuna Oikawa. Seeing Nasuna holds a serious personal problem, Norimichi finds he goes back in time to the past.

The dark-fantasy anime is divided into two major parts: 10 episodes in Oblitus Copernican Theory and 3 episodes in Illustrias Geocentric Theory. The setting is an artificial environment known as SE.RA.PH and the Moon Holy Grail War between Servants and Wizards is depicted in Fate/EXTRA Last Encore.

6. Arakawa Under the Bridge

Arakawa Under the Bridge (荒川アンダー ザ ブリッジ) is a comedy anime series adapted from the Hikaru Nakamura’s manga series serialized from 2004 to 2015. There are two seasons in the anime series, and totally 26 episodes were broadcasted in 2010.

Arakawa Under the Bridge is set in a riverside of Arakawa in Tokyo, where weird people live. The story centers on a 22-year-old elite business person Kou Ichinomiya called Riku, who is saved by a mysterious girl Nino when he is being drawn in the river. He comes to go with her living under the bridge at the riverside in gratitude for her.

March Comes In like a Lion (3月のライオン) is a coming-of-age and romance anime series created by Shaft. The original manga series, written by Chica Umino, has been serialized on Young Animal since 2007. The first season of the anime adaptation was released with 22 episodes in 2016-2017, followed by the second season’s 22 episodes were aired in 2017-2018.

March Comes In like a Lion has the theme of Shogi, which is a Japanese two-player strategy board game like chess. The story is set in a Shitamachi downtown in Tokyo in 2007 and later and follows the life of a 17-years-old professional Shogi player named Rei Kiriyama. He loses his family in a traffic accident in his childhood and nothing is going well in his life. However, he meets Kawamoto three sisters, the heroines in March Comes In like a Lion: Akari, Hinata and Momo.

If you want to know other popular anime studio’s anime recommendations, check these below.