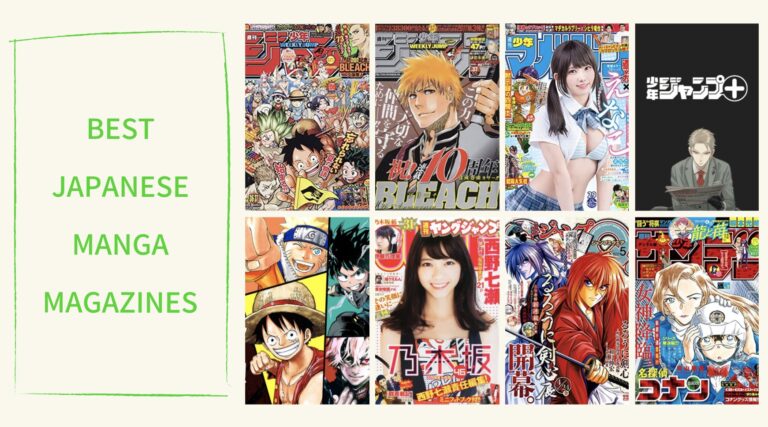 Manga has got more and more popular all over the world recently as well as anime and other Japanese pop cultures. Lots of high-quality manga series are released everyday and many of them are translated in English and other various languages and distributed worldwide.

As a custom of Japanese comic books fans, they read their favorite manga series and newly published titles on weekly and monthly manga magazines. In the latter part of the twentieth century, major manga magazines were founded by publishing companies in Japan. Almost all of the famous manga series have been created on the authentic manga magazines since then.

Tens of manga titles are serialized simultaneously on the same manga magazine, and only popular ones continue serializing and are adapted into anime series. To find trendy and worthy manga early, it’s strongly recommended to always check the Japanese manga magazines.

Today, I’d like to introduce 7 best manga magazines including both physical and online magazines with the best series serialized on them of all time.

For your information, Shonen (少年), which usually comes with the name of the popular manga magazines, means “boys”. The magazines were created targeting young boys before while they are loved in all age groups nowadays.

Weekly Shonen Jump is the best manga magazine from Japan, which was started by a Japanese publishing company Shueisha in 1968. It was published twice a month in the early period, and became the weekly style in 1969.

The worldly most famous and popular manga magazine are also published on the Jump’s online platform Shonen Jump Plus. About 20 manga titles are serialized on Weekly Shonen Jump now, which partly consists of the live legend adventure series One Piece and the popular super-hero manga My Hero Academia and the recent hit dark-fantasy Jujutsu Kaisen.

For all manga fans around the world, the bucket list should include these classic manga series Dragon Ball, JoJo’s Bizarre Adventure and Naruto in addition to the modern manga Demon Slayer: Kimetsu No Yaiba and Chainsaw Man.

▽Here is the list of best manga series on Weekly Shonen Jump!▽

Weekly Shonen Magazine (週刊少年マガジン), one of the most popular Japanese manga magazines, started its publication in 1959. It has been published by a Japanese publishing company Kodansha on Wednesdays.

The leading manga magazine was led by two major sports manga titles Star of the Giants (1966-1971) and Ashita no Joe (1968-1973). Then, Weekly Shonen Magazine reached the golden age with its biggest circulation in the 1990s.

Over 20 manga titles are simultaneously serialized on Weekly Shonen Magazine, which is recognized by a front cover with trendy female models and actresses printed on it.

You should read the modern popular fantasy series such as Fairy Tail and The Seven Deadly Sins from Weekly Shonen Magazine as well as the recent hit including Fire Force, Bakemonogatari and Tokyo Revengers.

The greatest modern manga series Attack on Titan, which was precisely serialized on the brother magazine Bessatsu Shonen Magazine between 2009 and 2021, will be handed down through future generations.

▽Here is the list of best manga series on Weekly Shonen Magazine!▽

Weekly Shonen Sunday (週刊少年サンデー) is one of the most famous manga magazines in Japan, published by a long-established publishing company Shogakukan from 1959.

In the 1980s, Weekly Shonen Sunday entered a golden age, serializing hit comedy and sports manga written by Rumiko Takahashi and Mitsuru Adachi. It had a circulation of over two million in 1983, which has remained the best record.

You should read the fantasy adventure manga Inuyasha, Zatch Bell! and Magi: The Labyrinth of Magic and Frieren: Beyond Journey’s End, too.

▽Here is the list of best manga series on Weekly Shonen Sunday!▽

Weekly Young Jump (週刊ヤングジャンプ) is a Shueisha’s manga magazine that has been popular among young adults since its publiaction began in 1979.

Around 20 manga series are serialized simultaneously on Weekly Young Jump, which are especially targeted for older readers to position itself apart from the popular brother magazine Weekly Shonen Jump.

In 2012, a new online manga website Tonari no Young Jump was launched, which got more known for the popular manga series One-Punch Man. The manga website releases brand new manga titles all the time for free.

Weekly Young Jump has been well-known worldwide especially for high-quality dark-fantasy manga series such as Tokyo Ghoul and Gantz recently. In addition to the classic genre, many manga fans also like romantic comedy titles containing Kaguya-sama: Love Is War and Kubo-san wa Mob wo Yurusanai.

▽Here is the list of best manga series on Weekly Young Jump!▽

On Shonen Jump Plus, the recent comedy manga Spy × Family and the action manga Kaiju No. 8 (Monster #8) are spotlighted these days. Fire Punch is one of the representative works by Tatsuki Fujimoto, who is also famous for Chainsaw Man. The sequel of Chainsaw Man will be serialized on Shonen Jump Plus.

▽Here is the list of best manga series on Shonen Jump Plus!▽

6. Manga Plus by Shueisha

Manga Plus by Shueisha, an official Shueisha’s online manga platform released in 2019, is one of the most important websites for foreigners to read popular manga for free legally. The manga platform is available in English and Spanish worldwide except Japan, South Korea and China.

You can read the ongoing manga serialized on Weekly Shonen Jump in real-time as well as many legendary manga series such as Dragon Ball, Naruto, Hunter x Hunter, Demon Slayer: Kimetsu no Yaiba, etc. for free on Manga Plus by Shueisha.

There are also top popular manga serialized on other Shueisha’s manga magazines like Shonen Jump Plus and Jump Square.

In addition to those famous classics above, it’s recommended to read the ongoing Jujutsu Kaisen, Boruto: Naruto Next Generations, Dr. Stone, Dragon Ball Super and so on.

▽Here is the list of best manga series to read on Manga Plus!▽

Jump Square (Jump SQ), which means “supreme quality”, is a monthly manga magazine published by Shueisha since 2007. A lot of less known manga have got popular and been adapted into anime series ever.

Around 20 exclusive manga titles are serialized at the same period, which includes the popular series moved from Weekly Shonen Jump such as World Trigger and the sequels of Rurouni Kenshin and The Prince of Tennis.

It’s recommended to read the completed dark-fantasy titles Claymore and Platinum End, and the recent manga Seraph of the End. The long-running World Trigger and D. Gray-Man are also worth reading from start to the latest episode.

Other finest series are offered to the authentic manga fans all over the world.

▽Here is the list of best manga series on Jump Square!▽

If you are interested in more Japanese pop cultures including manga, check these below!