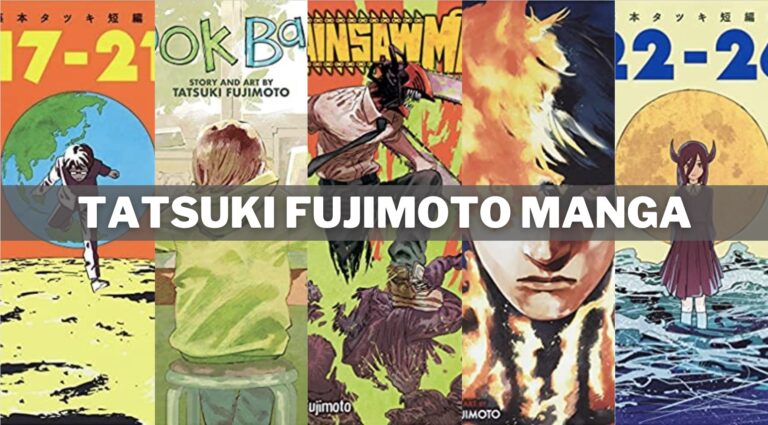 Chainsaw Man and Fire Punch. Authentic manga fans around the world who keep themselves open to the latest trend of increasing new manga have welcomed the impulsive works by a modern iconic Japanese manga artist Tatsuki Fujimoto. Fortuunately, there are more manga written by Tatsuki Fujimoto to read in English right now.

Tatsuki Fujimoto (藤本 タツキ), born in Nikaho, Akita prefecture on October 10, 1992, is one of the outstanding young manga artists in Japan. He had uploaded some manga on an online manga publishing site Neetsha since he was a high school student, where other famous manga artists Sui Ishida (Tokyo Ghoul) and One (One-Punch Man) had released their earliest works.

Tatsuki Fujimoto has got much more famous and popular worldwide since his masterpiece Chainsaw Man was released on Weekly Shonen Jump in 2018. After the first part of Chainsaw Man was concluded in 2020, he constantly releases quality short stories and collections.

Today, I’d like to introduce the list of best Tatsuki Fujimoto manga including the well-known series and the recent one-shot stories.

Chainsaw Man (チェンソーマン), the masterpiece of Tatsuki Fujimoto, has made him much more famous all over the world since the manga series began on Weekly Shonen Jump in 2018. It was serizlized as the first part Public Safety Saga until December, 2020, followed by the second part Academy Saga on Shonen Jump Plus from the summer of 2022. The first anime adaptation of Chainsaw Man is made by Mappa for broadcasting in 2022.

The dark-fantasy manga is set in the world, where human beings are under threat of Devils. It casts a spotlight on a poor 16-year-old boy Denji, who gets the ability to transform himself into Chainsaw Man by merging his pet dog and the Devil of chainsaw Pochita. Placed under the supervision of Makima, the leader of Public Safety Division 4, Denji works as a Devil Hunter fighting against a variety of vicious Devils.

Tatsuki Fujimoto released his first manga series titled Fire Punch (ファイアパンチ), which was serialized on Shonen Jump+ between 2016 and 2018 and consists of 8 volumes. The online manga platform served by Shueisha became much popular partly because of Fire Punch’s serialization. The dark-fantasy story is divided into three major parts.

Fire Punch, set in an apocalyptic world in the ice age caused by the Ice Witch, centers on a 15-year-old boy named Agni and his little sister Luna. They are blessed with the ability of regeneration, which enables him to give out a part of his body as food to village people. And then, his adventure of revenge against the other blessed character Doma.

As an excellent one-shot manga, Look Back (ルックバック) was welcomed in 2021 by people who knew Tatsuki Fujimoto after reading Fire Punch and Chainsaw Man. It was released on Shonen Jump+ and on Manga Plus by Shueisha for English-speakers at the same time. The moving drama story mixed with romance and thriller is composed of 143 pages.

Look Back tells the story of two talented elementary school girls who are good at drawing manga. Fujino, who becomes confident about her good drawing skills for an elementary school student, is surprised at another genius Kyomoto, who refuses to go to school. Their life as manga artists is depicted with a tragedy and drama.

Tatsuki Fujimoto created a brand new drama manga Goodbye, Eri (さよなら絵梨) in April, 2022, following the previous short story Look Back in 2021. The one-shot manga consists of about 400 pages. Many fans of Chainsaw Man and Tatsuki Fujimoto’s other comic books have been pleased since Goodbye, Eri was suddenly released on the official online manga platform Shonen Jump+ while its English edition was distributed on the free official website Manga Plus by Shueisha at the same time.

Goodbye, Eri depicts an ordinary Japanese life focusing on a fresh middle schooler Yuta, who is given a smartphone on his birthday and asked to shoot videos of his mother’s life until she dies of a disease. After he encounters a mysterious girl named Eri, he is getting into making a film. You will be impressed at the unpredicted story and his directed films.

Tatsuki Fujimoto Short Stories Collection 17-21 (藤本タツキ短編集 17-21) was published in Japanese as the first short-story collection of Tatsuki Fujimoto in October, 2021. It consists of four one-shot manga published between his ages 17 and 21 including his debut work Niwa ni wa Niwa Niwatori ga ita (庭には二羽ニワトリがいた。), Sasaki Has Stopped the Bullet (佐々木くんが銃弾止めた), Love is Blind (恋は盲目) and Shikaku (シカク). This is the original point of the hottest manga artist.

Following the previous work, Tatsuki Fujimoto released his second short stories collection titled Tatsuki Fujimoto Short Stories Collection 22-26 (藤本タツキ短編集 22-26) in November, 2021. There are four one-shot manga released when Tatsuki Fujimoto as from 22 to 26 years old: Nayuta of the Prophecy (予言のナユタ), Siren Rhapsody (人魚ラプソディ), When I woke up I had become a girl Disease (目が覚めたら女の子になっていた病) and Imoto no Ane (妹の姉).

Did you know which Tatsuki Fujimoto’s manga to read next? If you are interested in more recommended manga artists, check this list below!