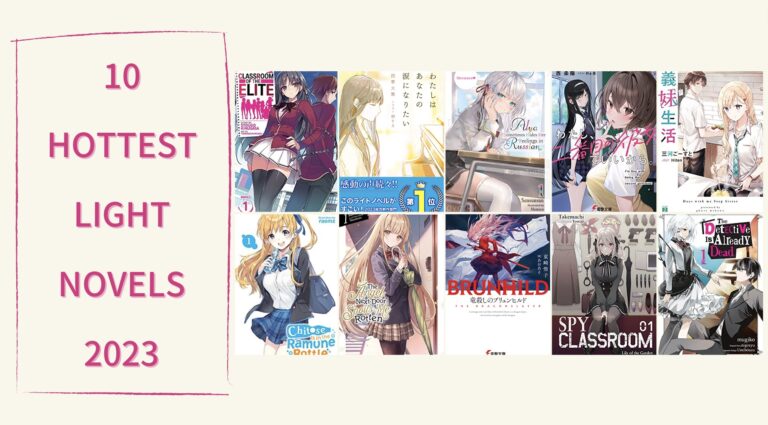 Light novels, one of the cutting-edge Japanese pop culture genres, have become more and more famous and popular across the world recently. Lots of titles are translated into English and other languages and published in a bunch of countries and regions every year. Some selling light novels are adapted into anime and manga series.

Categories of light novels range from Isekai and Naro-kei to school-theme and romantic comedy. There are countless series released ever, and you may wonder which you should read first now. To keep up with the latest trend of light novels, I’d like to introduce the list of 10 best light novels in 2023. This list is based on the hottest light novel ranking of Kono Light Novel ga Sugoi!, which is published by a Japanese publishing company Takarajimasha.

Some hottest books have not published outside Japan yet, but they will be available soon.

10. The Detective Is Already Dead

The Detective Is Already Dead (探偵はもう、死んでいる。) is listed on the 10 most popular light novels for 2023 as it was listed on the last year’s list (Ranked 8th in 2022.) The fantasy and mystery light novel has been published by the writer Nigoju and the illustrator Umibozu since 2019. It has been made into a manga adaptation in 2020 and was first adapted into an anime series by ENGI in 2021. If you look for something new to follow now, this growing title is one of the most recommended ones to choose. Centering on a mysterious detective girl Siesta, it revolves around her assistant Kimihiko Kimizuka and a 18-year-old high school heroine Nagisa Natsunagi.

Gimai Seikatsu (義妹生活), which is also known as Days with My Step Sister, has been looked on as one of the most popular light novels since it was ranked 7th on the Kono Light Novel ga Sugoi! list in 2022. The slice-of-life and rom-com novel originally started on YouTube in 2020 and its physical light novel series has been published by Kadokawa since 2021. It will spark a book since its anime adaptation was just confirmed in July 2022. It depicts what happens if an asocial-type high school student gets a younger stepsister since his father marries again. In contradiction to the modest boy, she, Saki Ayase, looks a flashy Gyaru.

Spy Classroom (スパイ教室), which is also known as Spy Room, is newly listed on the hottest light novels in 2023. The spy-themed fantasy action has been written by Takemachi and illustrated by Tomari since 2020, which has been made into manga adaptations since the same year. Spy Classroom is expected to become much more popular since it was announced that it would be adapted into the first anime series from the beginning of 2023 by Feel, an anime studio that was in charge of My Teen Romantic Comedy SNAFU and Dagashi Kashi. Spy Classroom features young girls who are trained to become a great spy to fight the information warfare.

7. I’m Fine With Being the Second Girlfriend

As a newcomer to the best light novels of the year, I’m Fine With Being the Second Girlfriend (わたし、二番目の彼女でいいから。) is listed for 2023. The romance light novel series, which was started by the author Joyo Nishi and the illustrator ReTake from 2021, depicts dangerous triangular love affairs of high schoolers. A second-grade high school boy Shiro Kirishima, who falls in love with a beautiful same-age girl Hikari Tachibana, dates a different girl Akane Hayasaka, who is his second most favorite. He is a second option for Akane, too.

Brunhild: The Dragon Slayer (竜殺しのブリュンヒルド) is one of the light novels that are drawing the most attention at the moment, published in June, 2022. Categorized as dark fantasy, it has been written by Yuiko Agarizaki and illustrated by Aoaso. The following title Brunhild: The Dragon Princess was also released in November. Brunhild: The Dragon Slayer casts a spot light on a desolate young girl Brunhild, who grows up with a divine dragon in an isolated island Eden. After 13 years since she met the dragon, it is killed by a dragon slayer, who later turns out to be her father.

A recent rom-com hit light novel Alya Sometimes Hides Her Feelings in Russian (時々ボソッとロシア語でデレる隣のアーリャさん) has become more and more famous worldwide since its publication began in 2021. It was originally serialized on an online user generated publishing platform Shosetsuka ni Naro from 2020. Ranked at ninth on the hottest light novels in 2022, Alya Sometimes Hides Her Feelings in Russian rises four places to fifth ranked at fifth in 2023. The unique romantic comedy concentrates on a beautiful half-Japanese, half-Russian high school girl Alya and her neighbor Masachika Kuze. She usually speaks to him in a belligerent tone but sometimes speaks in a sweet tone in Russian. Interestingly, she doesn’t know he understands Russian. This is the peaceful story of the new Tsundere girl. It is also exceptional that the heroine Alya made her debut as a VTuber (a Virtual YouTuber) in 2021: https://www.youtube.com/watch?v=q8R_Tljr0o8.

4. The Angel Next Door Spoils Me Rotten

As one of the most growing light novels, The Angel Next Door Spoils Me Rotten (お隣の天使様にいつの間にか駄目人間にされていた件) is featured on the 10 hottest light novels for 2023 as well as the previous list in 2022. The rom-com and slice-of-life light novel was originally serialized on a novel publishing website Shosetsuka ni Nar between 2018 and 2021, and its physical light novel series has been published by SB Creative since 2019. It has been adapted into a manga series since 2022 and an anime series since 2023. The Angel Next Door Spoils Me Rotten revolves around a fresh high school boy Amane Fujimiya. Starting living alone, he is not good at cooking or organizing. The story is rolled out when he meets a perfect beautiful girl Mahiru Shiina, who is excellent both in academics and sports and lives next to him.

A brand new drama light novel Watashi wa Anata no Namida ni Naritai (わたしはあなたの涙になりたい) was just released in July, 2022, and it was ranked at third on the latest best light novels list for 2023. It has been read recently as one of the most emotional stories by lots of novel fans and experts since its publication. A protagonist Yakumo Saegusa, who lost his mother to a rare disease, met a girl Yuzuki Igarashi in the music room of the elementary school. His life is changing after he meets the beautifully grown-up girl again, who becomes a high school student and a pianist of worldwide fame. This is the best tale of tears in 2023.

2. Chitose is in the Ramune Bottle

Chitose is in the Ramune Bottle (千歳くんはラムネ瓶のなか) is picked out as one of the best ongoing light novels for 2023 while it sat at the top of the list of the hottest light novels last year. It has been just inducted into the Japanese Light Novel Hall of Fame. Witten by Hiromu and illustrated by Raemz, the popular rom-com light novel series has been published since 2019. It has been adapted into a manga series by Bobcat since 2020. Chitose is in the Ramune Bottle centers on Saku Chitose, one of the most popular students in Fuji High School in Fukui Prefecture. With his friends who have a great social life in the school, he helps other students solve their personal problems.

1. Classroom of the Elite

Finally, Classroom of the Elite (ようこそ実力至上主義の教室へ) has been just chosen as the best light novel in 2023, boosting the light novel ranking while it was ranked at third in the previous year. It has been also looked on as the greatest masterpiece in the recent decade since its publication began in 2015. It completed its first part including 14 volumes in 2019 and re-started with the second part in 2020. It has been adapted into a manga series by Yuyu Ichino and into an anime series by Lerche since 2017. The second season of the anime adaptation aired in 2022, and the first part of the anime series will finish with the third season in 2023. Set in the Tokyo Metropolitan Advanced Nurturing School, Classroom of the Elite places an emphasis on an highly intelligent freshman Kiyotaka Ayanokoji. As a member of Class-D, he joins a variety of academic and sports games competing with other classes. In addition to the coolest protagonist, there are a lot of attractive characters including some heroines Suzune Horikita and Kei Karuizawa.

There are other notable Tankobon light novels to read now including Ascendance of a Bookworm (本好きの下剋上 ～司書になるためには手段を選んでいられません～) and Mushoku Tensei (無職転生 〜異世界行ったら本気だす〜) as well as those titles above.

Check out the latest trends of light novels for 2023 and enjoy the hottest contents!

▽This is the 10 hottest light novels for 2022, which contain many great works!▽

Which manga will come next to Chainsaw Man and Spy x Family? Manga from Japan and Webtoon from South Korea have got m[…] 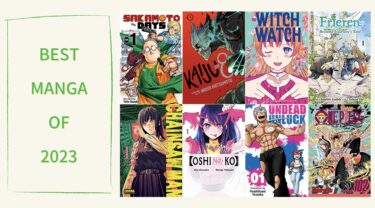