Anime used to be only a niche content loved by a handful of geeks in past days, however, it is being not only watched but also made all over the world in this day and age. You can enjoy a wide range of anime titles on various streaming platforms such as Netflix, Crunchyroll, Hulu and so on now.

Every year, hundreds of anime are released in Japan and distributed globally at the almost same time. To keep up with the cutting-edge anime trend, what should you check in 2023?

Today, I’d like to introduce the best anime of 2023 for beginners and advanced watchers. The famous dark-fantasy adventure is finishing with the final part, the next seasons of the hottest series are coming and some quality brand new works are scheduled to be released in 2023.

▽Have you already completed the greatest anime series and movies released in 2022?▽

Just keep getting the up-to-date information for the best anime 2023!

Attack on Titan Final Season Part 3 (進撃の巨人 The Final Season完結編), the last part of the fourth season to conclude the grand story of the epic series, has been announced to premiere in 2023. The original manga series written by Hajime Isayama began its publication in 2009 and was completed in 2021.

The previous part of Final Season broadcasted in the beginning of 2022 consists of 12 episodes, and only a small part of the unadapted story remains. More mysteries about the titans’ background are being unveiled as the story progresses. Let’s see the outcome of Eren’s fate and what happens to the world!

▽Check out the manga series earlier than the Attack on Titan Final Season Part 3 will arrive!▽

For many anime fans all across the world, the trendy dark-fantasy’s next season Jujutsu Kaisen Season 2 (呪術廻戦 2期) is a featured anime in 2023. Following the first season composed of 24 episodes airing in 2020-2021 and the smash-hit anime movie Jujutsu Kaisen 0 released in the end of 2021, the newest season presents the sequel to the Yuji Itadori’s adventure featuring the Gojo’s Past Arc and the Shibuya Incident Arc. More exciting fights and moving dramas await you in the upcoming part. The original manga written by Gege Akutami is running smoothly on Weekly Shonen Jump.

▽Check out the manga series earlier than the Jujutsu Kaisen Season 2 will arrive!▽

3. Classroom of the Elite Season 3

In March, 2022, the production of the following seasons of the popular anime series Classroom of the Elite (ようこそ実力至上主義の教室へ) was announced, based on its original light novel published since 2015. The first season of the anime adaptation was broadcast with 12 episodes in 2017; any additional information about the anime’s next season had not been released until very recently.

The second season scheduled to air in July 2022 and the third season in 2023 cover the whole part of the First Year Arc as well as the first season, which corresponds the first 14 volumes of the light novel series. The battles of Kiyotaka Ayanokoji with other classes are growing more intense and his background is being dug up more in the following seasons.

▽Check out the manga series earlier than the Classroom of the Elite Season 3 will arrive!▽

Light novels are one of the hottest Japanese contents these days as well as anime and manga, and many of the popular boo[…] 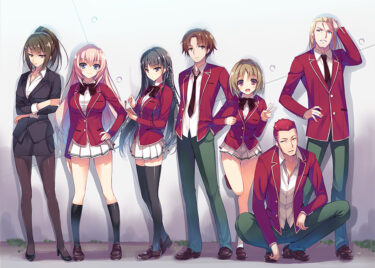 As one of the most popular sci-fi adventure manga and anime series in modern days, Dr. Stone has been watched globally on various online anime websites. Its original manga series was just completed with the 232nd episode in March, 2022 after the serialization on Weekly Shonen Jump for five years. There are 2 current seasons and a special television program titled Dr. Stone: Ryusui in the anime series so far, followed by the Dr. Stone Season 3 in 2023.

The third season depicts the story after the second arc Stone Wars and the new character Ryusui Nanami’s emergence. Though the manga series reached its grand finale, the anime series seems far from over.

In/Spectre Season 2 (虚構推理 2期) is an anticipated anime released in 2023, which used to be scheduled in the autumn of 2022. Like its first season consisting of 12 episodes broadcasted in 2020, the second season of the modern romance and mystery anime series is based on the same-titled novel series written by Kyo Shirodaira since 2011, which has been also made into a manga series since 2015.

The second season is also produced by Brain’s Base as well as the previous season. In/Spectre tells the story of a university student and female protagonist Kotoko Iwanaga and her boyfriend Kuro Sakuragawa, who tackle supernatural incidents caused by apparitions.

6. The Angel Next Door Spoils Me Rotten

The Angel Next Door Spoils Me Rotten (お隣の天使様にいつの間にか駄目人間にされていた件) will be adapted into the first anime series in 2023, which has been featured as one of the 10 hottest light novels for 2022. The light novel series has been written by Saekisan and illustrated by Hanekoto since 2019. Its manga adaptation has been also published since the beginning of 2022.

The romantic comedy anime, also classified into slice of life, centers on a high school boy Amane Fujimiya living on his own. The story begins when he meets a cute girl Mahiru Shiina, who lives next door to him.

There are lots of latest anime series that have unique themes and plots these days. A new interesting rom-com anime series released in 2023 is titled InuHiro: My Life as Inukai-san’s Dog (犬になったら好きな人に拾われた。), also mixed with slice of life and fantasy. It is adapted from Gosei Furukawa’s original manga serialized since 2020.

InuHiro: My Life as Inukai-san’s Dog centers on an ordinary high school student who is unexpectedly transformed into a dog and picked up by his cool and beautiful classmate Karen Inukai.

Oyukiumi no Kaina (大雪海のカイナ), which literally means Kaina of the Great Snow Sea, is an anticipated brand new anime show broadcasting in Fuji TV’s +Ultra block from January, 2022. It is based on the original manga series written by Tsutomu Nihei, who is also known for Knights of Sidonia. Commemorating the 40th year anniversary of the foundation of Polygon Pictures, the sci-fi anime is made by it and directed by Hiroaki Ando, whose recent masterpiece is Ajin: Demi-Human.

The setting is a post-apocalyptic world where only a handful of people can survive due to the spread of the Great Snow Sea. A protagonist Kaina, who lives above the Tenmaku that extends from the roots to the tops of giant Orbital Trees, meets a girl Liliha, who comes from the ground.

If you are interested in further recommendations of the best anime of all time as well as the latest anime of 2023, check out these lists below, too!