Where Does 86 Anime End in Light Novel?

The recent sci-fi anime 86 -Eighty Six- has distinguished as an astonishing newcomer since it started airing in April, 2021. The cool and impressive anime is composed of multiple genres including mecha, drama, action and adventure as well as science fiction. The tough 86 characters surviving in the severe and cruel circumstance moves hearts of many anime fans.

86 -Eighty Six- is adapted from the renowned light novel series written by Asato Asato and illustrated by Shirabii since 2017. The first anime series was scheduled to finish in the end of 2021, however, the anime studio A-1 Pictures postponed the last two episodes to improve the quality of the animation. Finally, the 86 -Eighty Six- anime completed with Epiosode 22 “Shin” and Episode 23 “Handler One” in March, 2022.

How many volumes does 86 -Eighty Six- have?

There are 11 volumes in the light novels series of 86 -Eighty Six- so far (the latest volume published in February, 2022), and the most part has been already translated into English.

It has been also adapted into a manga series since 2018, but it covers only a small fraction of the light novel volumes. The current anime series goes even further than the manga series. Therefore, it’s much more recommended to read the light novel series that the manga to enjoy the sequel of the 86 -Eighty Six- anime.

Which volume to read after the 86 -Eighty Six- anime?

The first season of the 86 -Eighty Six- anime consisting of 23 episodes ended in the end of the volume 3 “Run Through the Battlefront (Finish)” of the light novel series. It covers the early two parts The Republic of San Magnolia Arc and The Empire of Giad Arc.

That is to say, you should read from the volume 4 “Under Pressure” to enter the third story arc of the series, the sequel of the anime series.

It’s also recommended to read the 86 light novel with Kindle cheaper that paperback, and you don’t need to be bothered about out-of-stock condition!

Since there are so many volumes that have not been adapted into anime, you can expect the next season of the anime series will come in the near future. Let’s go ahead of it!

Just keep up with the latest part of the continuing light novel for more stories about Shin and Lena! 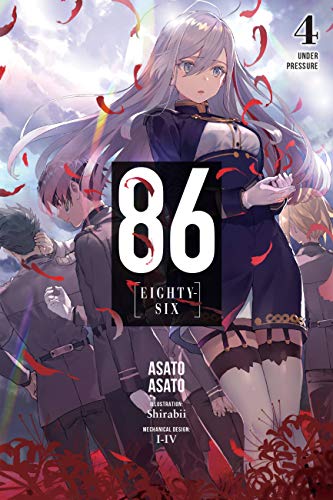 If you are interested in other anime adapted from light novel series, check these recommendations below, too!