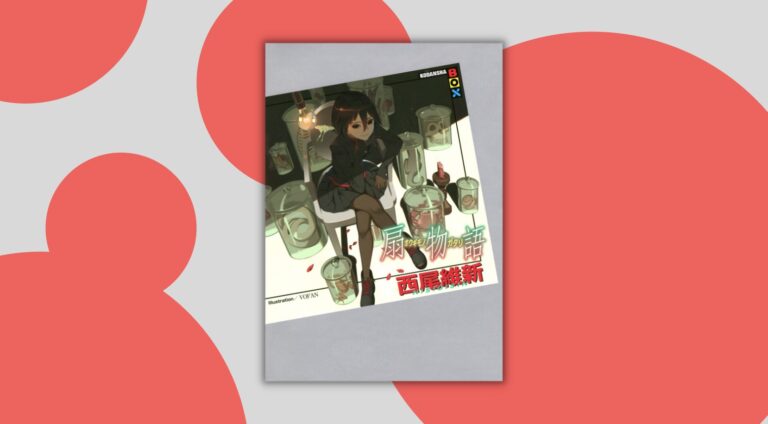 Ougimonogatari (扇物語) was released on October 28, 2020 as the 26th volume of Monogatari Series written by Nisio Isin, following the previous title Amarimonogatari in 2019. Ougimonogatari, the part 4 of Monster Season, consists of two episodes Ougi Right and Ougi Flight. The cover illustration of Ougimonogatari is drawn by Vofan focusing on Ougi Oshino.

>>>Next Part 5 of Monster Season: Shinomonogatari

Ougi Right (おうぎライト) is the first episode included in Ougimonogatari, which is largely composed of it devoting about four-fifths of pages. Ougi Right, positioned as the sixth episode of Monster Season, can be roughly divided into two parts: the story of Koyomi Araragi, who encounters strange phenomena themed on apology and the narration by a female character.

Ougi Right revolves around the protagonist Koyomi Araragi, who is a freshman at Manase National University. He listens to Meniko Hamukai, who is the only friend that he makes in the university and holds a personal problem: her boyfriend apologizes to her and people aroundher over and over again although there is no reason to do that.

Koyomi remembers that his girlfriend Hitagi Senjogahara also apologizes to him for the terrible things that she did to him in the past and talks about breaking up suddenly at the start of a year.

His old friend Sodachi Oikura, who also gets along with Hitagi now, apologized to him, too, which makes him confidently conclude that the puzzling phenomena of apology are caused by an apparition (Kaii).

To consult Ougi Oshino, an expert of apparitions and the back side of Koyomi, he returns to his hometown after long absence.

Click here for more details (Spoiler alert!)
At first, he stops by the house of Suruga Kanbaru, who hangs out with Ougi these days. However, there is nobody at home except Hoshiame Higasa, a Suruga’s teammate in the school basketball club. Koyomi finds the apology phenomena doesn’t extend to his hometown by talking to her as well as his little sisters Karen and Tsukihi.

After Ougi comes back with Suruga, Koyomi elicits views on a series of the apology phenomena from Ougi, who is depicted as a male high schooler in Ougimonogatari. Suggesting five possibilities for them, Ougi explains four of the five (he is on the way to the house of Nadeko Sengoku to get out her drawings from her room).

Koyomi meets Mayoi Hachikuji, who takes over responsibility for telling the fifth possibility and the detail of the apparition of apology called “Ayamarei”, on the following day. The apparition forces people to apologize for no justifiable reason.

He encounters the boyfriend of Meniko and gets apologies from him at the university later. Since Koyomi understand that he is charged by the apparition to apologize, he gives a new order for him to stay away altogether from Meniko, overwriting the old order with the power of Shinobu Oshino, who was the king of apparitions.

It’s found out that all the subjects who are forced to apologize have a certain thing in common: they are students of Manase National University and graduate from Naoetsu Private High School, which corresponds Hitagi, Sodachi (though she transferred to another school) and the boyfriend of Meniko.

According to the research of Hoshiame, a third-grade Naoetsu Private High School student named Ochiba Joraku turns out the be the source of the apology apparition. She is situated in a desperate position to obtain an admission to Manase National University feeling jealousy against the current Senpai students who look happy and successful.

Koyomi goes visiting Ochiba to listen to her and gets Shinobu to take a bite at her and drain the apology apparition inside her body. In the last, Ougi suggests to take care of Ochiba in the future instead of Koyomi. 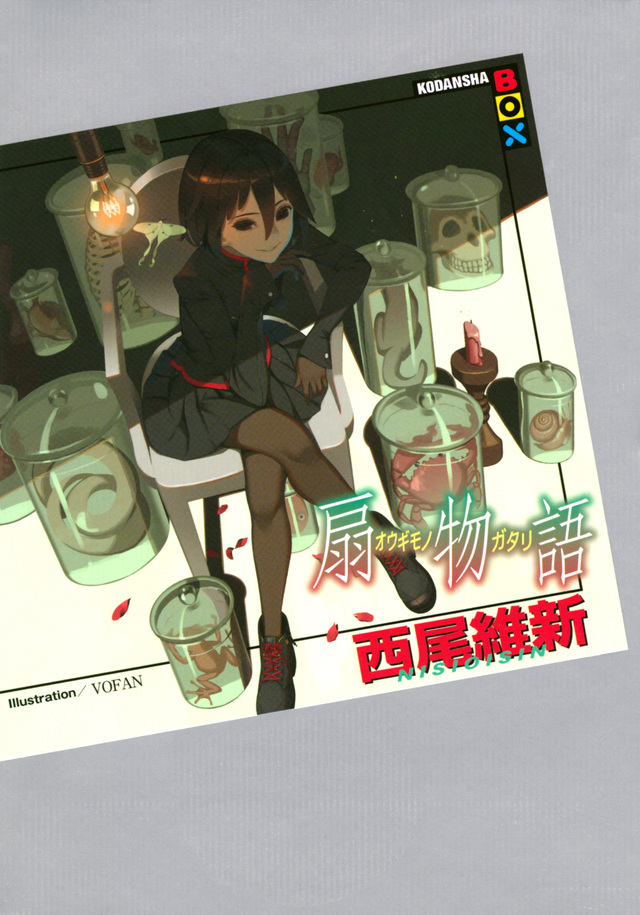 Ougi Flight (おうぎフライト) is the second and shortish episode of Ougimonogatari, also known as the seventh episode of Monster Season. The story is written from the Nadeko Sengoku’s point of view.

Ougi Flight focuses on the story of Nadeko Sengoku, who lives under the supervision of the apparition specialists Yotsugi Ononoki and her supervisor Izuko Gaen. By order of Izuko, Nadeko visits Nakuna Tooboe, who was the classmate in Nanahyakuichi Public Middle School and is hospitalized since June of last year.

It’s her to imprecate a curse on Nadeko last year. In compensation for invoking the curse, Nakuna gets lots of holes spreading throughout her entire body.

Nadeko also goes in to meet Sunshi Sajo, another student who cursed her because she refused his confession of love last year.

Click here for more details (Spoiler alert!)
Nadeko is charged to see Nakuna and draw a picture of her to break the curse as a training to become an apparition specialist. In the result, the holes are removed from her body.

She notifies Yotsugi of the outcome and gives the drawing to her, which is the purpose of Izuko to collect the curse of the snake apparition.

Nadeko tells Ougi Oshino that she sees Sunshi and copes with the same problem and receives a pile of manga drawings packed in a suitcase presented by Ougi.

In the final phase of Ougi Flight, Yotsugi lies in wait for Nadeko with a specialist and a con man Deishuu Kaiki in front of her apartment. They tell her that they trace the location of Uroko Araundo, the source of the snake apparition that Deishuu dealt with and Nadeko was damaged by last year. It also turns out that her real name is Uroko Gane and she is the daughter of Izuko.

Their next mission is flying to Iriomote Island in Okinawa and meeting Uroko Araundo there.

Can you enjoy the anime adaptation of Ougimonogatari?

Many fans of Monogatari Series are wondering if the rest of the light novel parts are made into anime adaptations such as Off Season and Monster Season. The director Akiyuki Shinbo said it would depend on the anime production company Aniplex, however, we can believe they will be adapted into the anime series of Ougimonogatari with high quality in the future since the studio Shaft has created that Monogatari Series, which had been looked on impossible to be adapted into anime.