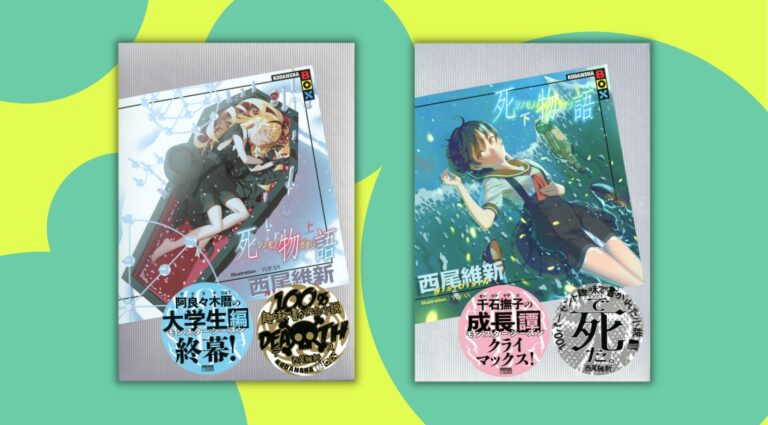 Finally, Shinomonogatari (死物語), the fifth and last part of Monster Season of Monogatari Series, was just released by Nisio Isin on August 19, 2021 following the previous title Ougimonogatari published in 2020. Shinomonogatari consists of two books as Owarimonogatari was released with three separate books in 2013 and 2014.

At the same time as the release date of Shinomonogatari, an official trailer was made to promote the last part of Monster Season. The good news for fans is that the short movie is narrated by Nadeko Sengoku (voiced by Kana Hanazawa) and Shinobu Oshino (voiced by Maaya Sakamoto).

Additionally, a 2-min video to look back at the whole series from the first novel Bakemonogatari to the final Shinomonogatari, also narrated by Nadeko Sengoku (voiced by Kana Hanazawa) and Shinobu Oshino (voiced by Maaya Sakamoto).

Shinobu Suicide (しのぶスーサイド) is the eighth episode of Monster Season, included by Book 1 of Shinomonogatari. According to the afterword in Ougimonogatari, Nisio Isin said this part would be divided into three parts: Distopia Destiny, Distopia Destination and Distopia Diseducation, which are consolidated to the single episode Shinobu Suicide in the result.

Given a description of the neat chronological order, Shinobu Suicide happens after Nadeko Around in Book 2.

Shinobu Suicide is set in the present day, when the novel coronavirus COVID-19 spreads all over the world.

Koyomi Araragi, who is a sophomore in Manase National University, is suggested to visit a location in Central Europe, which used to be known as Acerola Kingdom, by Shinobu Oshino. According to her inspiration, something must happen to an ancestral vampire Deathtopia Virtuoso Suicide-Master, who vampirized Shinobu about 600 years ago.

At the same time, an apparition specialist and a violent onmyouji Yozuru Kagenui asks them to come to where she stays with her shikigami doll named Yotsugi Ononoki. It is found that the place is what Koyomi and Shinobu have to go to.

Koyomi and Shinobu gets to know that Europe is rife with a new virus that is transmitted only to immortal apparitions, later called the Anti-Vampire Virus.

They embark on research for what happens to Deathtopia Virtuoso Suicide-Master and where the Anti-Vampire Virus breaks out.

Click here for more details (Spoiler alert!)
After arriving at the former Acerola Kingdom, which was governed by Princess Acerola (a.k.a. Princess Beauty), Koyomi and Shinobu directly sees Deathtopia Virtuoso Suicide-Master on the verge of dying of the Anti-Vampire Virus.

About 600 years ago, Princess Beauty before her transforming herself into the vampire had the power to make people kill themselves because she was too beautiful. Tropicalesque Home-A-Wave Dog-Strings, the first and only relative of Deathtopia Virtuoso Suicide-Master, died due to the curse of Princess Beauty, which was unintended by Princess Beauty.

It’s against this background that Princess Beauty decided to transform herself into the vampire as Kiss-Shot Acerola-Orion Heart-Under-Blade in order to prevent killing living beings any further.

In the result, Shinobu sucks almost all blood of Deathtopia Virtuoso Suicide-Master to humanize her, which means she is helped out of the the Anti-Vampire Virus. It is also uncovered that the virus was caused by Tropicalesque Home-A-Wave Dog-Strings, who was drawn into the body of his ancestor vampire after death. His love for her and jealousy over his new “sister” Kiss-Shot Acerola-Orion Heart-Under-Blade caused the Anti-Vampire Virus, which ends up making his beloved master suffer.

At the end of Shinobu Suicide, the story of less than three years after that is also told. Koyomi successfully graduates from the university with Hitagi Senjogahara and is reconciled with his old friend Sodachi Oikura. It’s also suggested that he comes to live with Tsubasa Hanekawa in the same apartment. Shinobu tells him Deathtopia Virtuoso Suicide-Master finally died due to COVID-19 simultaneously with that.

Nadeko Around (なでこアラウンド) is the ninth and final episode of Monster Season, contained by Book 2 of Shinomonogatari. It’s presented as a sequel to the episode 7 titled Ougi Flight in Ougimonogatari. The author Nisio Isin says he didn’t expect the Around Arc would become one of the main stories in Monster Season since it started first as a side story.

Nadeko Around happens before Shinobu Suicide and after Ougi Flight centering on a 15-year-old socially withdrawn middle schooler Nadeko Sengoku. She heads off to Iriomote Island in Okinawa by plane with a specialist and a con man Deishuu Kaiki and a tsukumogami and shikigami doll Yotsugi Ononoki.

They are sent to the destination by Izuko Gaen, the leader of the apparition specialist organization, in order to investigate the reason why Uroko Araundo establishes a base in Iriomote Island. Uroko Araundo is the author of the mischief who casts hexes of the snake apparition called Jagirinawa, which Nadeko was inflicted by and Deishuu dealt with before.

And then, the three characters are involved in an airplane accident, and at least Nadeko survives the crash. She wakes up finding she is stranded on a deserted island.

Click here for more details (Spoiler alert!)
On the way to Iriomote Island, Nadeko and Yotsugi are told the surprising fact that Uroko Araundo is actually the daughter of Izuko by Deishuu, whose real name is Uroko Gaen.

After the airline crash, Nadeko has to start her life on the desert island with her body completely nude and without anyone else. Her survival for 14 days is supported by trying her best to building a fire, ensuring clean water, catching fish and so on.

She gets the urge to draw a picture after the two weeks and makes a four-frame manga focusing on Yotsugi on the beach, which results in reviving Yotsugi with the Nadeko’s ability to materialize her drawn pictures, who is drowned at sea due to the flight accident.

That is why Yotsugi shows up in front of Nadeko suddenly when she is attacked by a giatn habu snake. She is informed by Yotsugi that Deishuu dies in the crash.

In the final phase, they leave the island, which turns out to be the edge of the targeted Iriomote Island, for a resort where Uroko stays. Nadeko has a showdown with Uroko, whose arms and legs are covered by scales under the curse of snakes. Nadeko paints a picture of her with worlds of scales, which enables Uroko to get free from the curse of the snake apparition.

As an epilogue, it’s told the near-future story of three years later. Nadeko, who reaches the age of 18, moves up to Tokyo to make genuine efforts to create manga. Before setting off for Tokyo, she encounters Deishuu and is accepted as a full-grown specialist by him though it’s not known exactly why he survives the accident.

Can you enjoy the anime adaptation of Shinomonogatari?

Many fans of Monogatari Series are wondering if the rest of the light novel parts are made into anime adaptations such as Off Season and Monster Season. The director Akiyuki Shinbo said it would depend on the anime production company Aniplex, however, we can believe they will make the anime series of Shinomonogatari in the future since the studio Shaft has created that Monogatari Series, which had been looked on impossible to be adapted into anime. 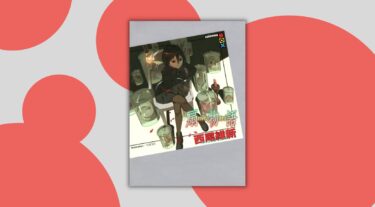