Our day is the best time for anime fans all over the world since tens of high-quality new anime are made and distributed all over the world in all seasons. That is to say, you can enjoy watching hundreds of new anime including brand new titles and the popular series sequels every year.

Today, I’d like to introduce a list of the best anime of 2021, which consists of three best anime in each season from the diverse lineup in 2021. These greatest anime series will be highly rated in the future.

▽Here are newer lists of the best latest anime movies!▽

Wonder Egg Priority (ワンダーエッグ・プライオリティ) is a completely original anime series that is not adapted from any manga or novels unlike many popular anime adaptations. 12 episodes were broadcasted between January and March, 2021. Wonder Egg Priority focuses on 14-year-old girls including a main character Ai Ohto, who fight in parallel worlds to save self-slaughtered friends.

The psychological fantasy anime was expected to come to the end with the 12th episode, however, the fans didn’t achieve the desired result. Instead, it has been announced that its sequel will be aired in the end of June, 2021. Check the trailer for the sequel story below!

Laid-Back Camp Season 2 (ゆるキャン△ SEASON 2) was finally released with 13 episodes following the first season in 2018 and the spin-off Heya Camp in 2020. The second season preserves the finest quality as well as the first one, adapted from the original manga series by Afro. In addition to the current main characters including Rin and Nadeshiko, some new girls are featured in the new stories such as Nadeshiko’s childhood friend Ayano and Aoi’s little sister Akari.

Mushoku Tensei (無職転生 ~異世界行ったら本気だす~) is the best anime series in Winter 2021, which many anime fans will agree with. The Isekai anime is adapted from the popular light novel written by Rifujin na Magonote and illustrated by Shirotaka since 2014. Mushoku Tensei centers on a 34 years old unemployed man, who is reincarnated as a child named Rudeus in a fantasy Isekai world. He grows up achieving the skills of magic and sword.

Mushoku Tensei has the highest quality in other recent Isekai anime series. It has been announced that the sequel part will be released soon.

▽Are you interested in the following story after the anime series?▽

Super Cub (スーパーカブ) is one pf the finest anime in Spring 2021, which is made from the original light novel series published from 2017. It is categorized as slice of life with the theme of Honda Super Cub, a traditional Japanese motorcycle.

One day, a high school girl Koguma gets a Honda Super Cub and begins a friendship with her classmate Reiko, who also loves a motorcycle. They come to enjoy their daily life in Yamanashi Prefecture driving their motorcycles.

Zombie Land Saga Revenge (ゾンビランドサガ リベンジ) is the second season of the comedy coming-of-age anime series Zombie Land Saga, which started in 2018. The high quality of the story and drawings are maintained by the hot anime studio Mappa.

Zombie Land Saga Revenge depicts the story after the iconic idol group Franchouchou’s successful live performance at Arpino. Each character confronts further problems and grows up while they are alive as a zombie. There are powerful performance scenes, serious human dramas and humorous comedy in the anime.

The best anime in Spring 2021 is a new science fiction and drama anime series 86 (86-エイティシックス-), which is also one of the most anticipated anime in this season. 86, created by A-1 Pictures, is adapted from the Asato Asato’s light novel series published from 2017. The first season consists of 11 episodes aired between April and June, followed by the second season from October, 2021.

7. The Aquatope on White Sand

Unlike other most anime series adapted from popular existing manga or novels, The Aquatope on White Sand (白い砂のアクアトープ) is a brand new original anime produced by a hot Japanese anime studio P.A. Works. The first part of the series aired with 12 episodes in Summer 2021, followed by the second half in the next season.

The slice-of-life and coming-of-age anime is set in Japan’s southernmost Okinawa filled with rich nature. A young girl Fuka Miyazawa gets away from her identity as an idol and reaches a small aquarium in Okinawa, which is managed by a high school girl Kukuru Misakino. They work hard to re-establish the stability of the collapsing local aquarium.

8. The Duke of Death and His Maid

The Duke of Death and His Maid (死神坊ちゃんと黒メイド) is the second best anime in Summer 2021, categorized as fantasy and romantic comedy. The latest anime series is adapted from the original manga serialized on Sunday Webry by a manga artist Koharu Inoue since 2017. The first season of the anime adaptation consists of 12 episodes, and it’s officially announced that the following story will be made in the future.

The Duke of Death and His Maid centers on young noble boy called Duke, who has claimed any lives he touches since he was cursed by a witch when he was 5 years old. He has been taken care of by his maid Alice Lendrott for two years, and she always approaches him without fear of the curse for her attachment to him. In addition to the two main characters, his little sister Viola and their unique friends Cuff and Zain color the anime attractively.

As the best anime in Summer 2021, Tokyo Revengers (東京卍リベンジャーズ) is picked up for its high popularity and quality. The science fiction, action and thriller anime has the modern Japanese anime themes of Yanki (Japanese gangs) and time travel. It was originally started as a manga series written by Ken Wakui from 2017, and its anime adaption began in April, 2021. The first season was completed with the 24th episode in September, 2021. Many fans of Tokyo Revengers already expect the following story to be made into the anime adaptation soon.

Set in Tokyo in the modern time, Tokyo Revengers focusing on a 26-year-old part-time jobber Takemichi Hanagaki. The story proceeds at first when he reacts to the news that Hinata Tachibana, his ex-girlfriend in his middle school days, is killed by a violent conflict of the Tokyo Manji Gang. After being sent to the past when he was a yanki middle schooler suddenly, he decides to change the history to save Hinata.

Numerous modern anime fans get into the unpredictable story and a variety of cool and unique yanki characters in the Tokyo Manji Gang. In the first season of the anime series, only a part of the manga series are made into the anime adaptation. For the following episodes, you have no choice but to wait or read the original manga!

Blue Period (ブルーピリオド) is one of the most appraised new anime series airing in autumn of 2021. The coming-of-age series is adapted from the popular ongoing manga that has been serialized on Monthly Afternoon by the manga artist Tsubasa Yamaguchi since 2017. The first season of the anime adaptation contains 12 episodes.

Blue Period is set in Tokyo and centers on a delinquent high schooler Yatora Yaguchi, who has superior performance in studying but indulges in underage smoking and drinking. After spending boring school days, one day, he is inspired to draw a picture by a painting he sees at his high school’s art club.

Some highest-quality anime series were released in autumn of 2021, and which is the best for you. Without a doubt, JoJo’s Bizarre Adventure: Stone Ocean (ジョジョの奇妙な冒険 ストーンオーシャン), the fifth season of the anime series, was released with 12 episodes exclusively on Netflix. It is adapted by a Japanese anime studio David Production Inc. from the sixth part of the original manga written by Hirohiko Araki between 1999 and 2003.

Stone Ocean is set in the United States in 2011, placing an emphasis on the female protagonist Jolyne Cujoh, the daughter of Jotaro Kujo who is the protagonist of Jojo’s third part Stardust Crusaders. She is accused unfairly of an accident and sentenced to 15 years in prison. And, she awakens a Stand called Stone Free getting into lots of troubles in the prison.

After the incident of the Mugen Train, Tanjiro, Zenitsu and Inosuke are involved in the next journey led by Tengen Uzui, the Sound Hashira. Set in the entertainment district of Yoshiwara, Tokyo, it presents the battle between the selected demon slayers and the Upper Rank Six of the Twelve Kizuki.

More
Demon Slayer: Kimetsu no Yaiba 2nd Season is to be Released in 2021 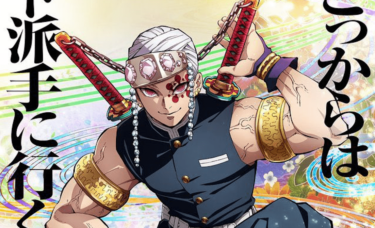 What do you think the best anime series of 2021? Let’s enjoy the present season and wait until the next season’s titles come!