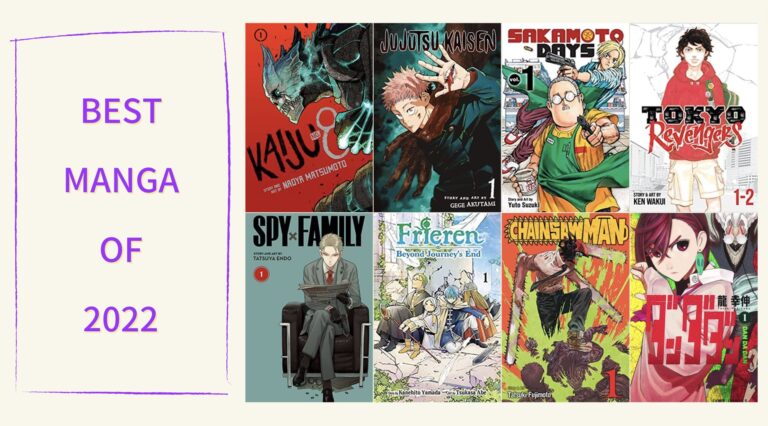 Let’s keep up with the latest manga trend next to My Hero Academia and Demon Slayer: Kimetsu no Yaiba!

Japanese pop culture has been more recognized worldwide lately, and you can see the unrestrained expansion of manga as well as anime and light novels. Lots of popular manga series have been translated into English and other languages as soon as the original Japanese edition released, and they have a bigger and bigger circulation in the global market today.

Then, what is the hottest manga to read this year? Today, I’d like to introduce 13 most popular manga of 2022 including the worldly less-known but domestically trendy series and the must-read comic books newly serialized.

The biggest-circulation Japanese manga magazine Weekly Shonen Jump has satisfied a large number of fans all over the world with unique comedy manga as well as classic adventure and action. Sakamoto Days is an ongoing action comedy manga written by Yuto Suzuki since 2020, which is looked on as one of the hottest manga in Japan at the moment.

It tells the story of Taro Sakamoto, who used to be the most famous hitman but stands back from the shady world to form a peaceful family with his wife and their daughter. In conflict with his intention, he has to fight against lots of assassins targeting at him.

Chainsaw Man (チェンソーマン), a must-read for every manga fan around the globe, has been already known as one of the greatest manga series in the 2020s. The action, dark-fantasy manga, written by Tatsuki Fujimoto, started its publication in 2018 and came to the end in 2020 earlier than many fans expected.

The shocking theme and symbolic devil characters have kept the readers absorbed. It’s announced that the following part will be serialized on Shonen Jump Plus from the summer of 2022 and its anime adaptation will be released by Mappa within this year. The latest short story of the author titled Look Back is also one of the best recommendations to read in 2022, too!

In addition to the latest outstanding comics, a brand new impressive one-shot manga was born in April, 2022: Goodbye, Eri (さよなら絵梨). The drama short manga was made by the high-profile manga artist Tatsuki Fujimoto, who is also famous for Chainsaw Man, Fire Punch and Look Back. At the same time as Japanese edition was released on Shonen Jump Plus, its English edition was distributed on the official manga publishing website Manga Plus by Shueisha for free.

Goodbye, Eri centers on an incoming middle school student Yuta, who is given a smartphone on his birthday and asked to film his mother’s life until she dies of a disease. After he encounters a mysterious girl named Eri, he is getting into making a film.

<<Read Goodbye, Eri in English on Manga Plus!>>

What has sparked a boom the most recently is a spy-themed action comedy Spy×Family, which has been published by the author Tatsuya Endo on the online publishing platform Shonen Jump Plus every two weeks since 2019. Fans are looking forward to watching the first anime adaptation to be broadcasted from April, 2022.

Spy×Family tells the story about a fake family comprising a professional spy Loid Forger, his wife and skillful assassin Yor Forger and their adopted psychic girl Anya Forger. While the “parents” carry out their missions behind a veil of secrecy, Anya reads their minds but hide them to live peaceably. You can enjoy both the serious story of the escalation of international tensions of two great powers and the humorous scenes with comedy there.

What is your hottest manga and anime series these days? What has achieved much praise from modern fans of Japanese and f[…]

Dead Dead Demon’s Dededede Destruction (デッドデッドデーモンズデデデデデストラクション) is one of the greatest manga series that finished its serialization in 2022. The coming-of-age manga mixed with fantasy contains 12 volumes published from 2014 to 2022. It is written by a renowned modern Japanese manga artist Inio Asano, who also completed Solanin (2005-2006) and Goodnight Punpun (2007-2013). It has been announced that Dead Dead Demon’s Dededede Destruction will be the first Inio Asano manga adapted into an anime series.

Dead Dead Demon’s Dededede Destruction depicts the contrast between adolescent days and a crisis of the world and humans. The setting is Tokyo, where a circular mothership has hovered in the sky as if it were air since the aliens invaded the city three years ago. A high school girl Kadode Koyama with short hair and eye glasses enjoy her school days with her best friend Ouran Nakagawa, a twintail Chunibyo girl.

A shocking manga titled Takopi’s Original Sin (タコピーの原罪) blazed onto the Japanese comic book scene in the end of 2021, which just finished its story after being serialized on Shonen Jump Plus for more than three months. The Taizan 5’s first serialized manga series consists of 16 episodes that depict a poor elementary school girl Shizuka. She gets cruelly bullied by her classmates due to a complicated family circumstance.

One day, she encounters an octopus-shaped alien, which is named Takopi by her, it uses the Happy Tools brought from the Happy Planet to make her happy. However, they sometimes lead to unintended consequences. The English edition of the Takopi’s Original Sin’s tankobon has not been published yet, but you can read it on the official online publishing site Manga Plus by Shueisha for free.

<<Read Takopi’s Original Sin in English on Manga Plus!>>

Jujutsu Kaisen (呪術廻戦), which has been one of the most-watched manga series for these few years, will still continue to be a notable trend worldwide in 2022 and the next several years. The dark-fantasy adventure has been serialized on Weekly Shonen Jump since 2018, written by Gege Akutami. Following the hit anime movies Jujutsu Kaisen 0 in 2021, it’s just announced that the secound season of the television anime series will come in 2023.

In addition to the protagonist Yuji Itadori, who gets a part of the king of the Curses into his body, other coolest characters including his friend Megumi Fushiguro, his teacher Satoru Gojo and his senpai student Yuta Okkotsu have occupied the spotlight. Don’t miss the powerful battles between the jujutsu sorcerers and the Curses.

For every fan of action and science fiction, Kaiju No. 8 (怪獣8号) is one of the hottest recommendations to read in 2022. The new action manga just started its serialization on the Shueisha’s online platform Shonen Jump Plus in 2020, which you can read in English in real time on the free official manga website Manga Plus.

A 32-year-old Monster Sweeper named Kafka Hibino, who failed the exam of the Japanese Defense Force so many times. While he decides to make efforts to become a member of the Defense Force, he gets a power to transform himself into a powerful monster by accidentally swallowing a tiny monster.

The largest Japanese manga company Shueisha has focused its efforts on developing online publishing platforms Shonen Jump Plus and Manga Plus as well as the famous existing physical magazine Weekly Shonen Jump recently. what is drawing the most attention from across the world in Shonen Jump Plus is a cutting-edge action comedy Dandadan (ダンダダン). It has been written by Yukinobu Tatsu since 2021.

The occult-themed recent manga series centers on two high schoolers: Momo Ayase who believes in ghosts but disbelieves aliens; Ken Takakura who believes aliens exist but refuses to believe in ghosts. They are stepping into the supernatural world where both aliens and ghosts exist.

Many manga fans are enjoying the fantasy adventure story of Frieren: Beyond Journey’s End (葬送のフリーレン) these days. It has been serialized on Weekly Shonen Sunday since 2020 as one of the most popular manga recently. The unique adventure manga doesn’t tell a story of hero party until they defeat the end boss.

It focuses on the story after the hero party beats the Devil King at the end of a 10-year journey, revolving around an elven girl Frieren, who has a lifetime for over a thousand years.

The Apothecary Diaries (薬屋のひとりごと) is a trendy manga series that is getting more popular not only domestically but also worldwide. Based on the hot light novel series written by Natsu Hyuga since 2011, its manga adaptation has been made by a manga artist Itsuki Nanao since 2017. Both the fans of the light novel and manga series are expecting its anime adaptation production in the near future.

The mystery, rom-com manga is set in an Eastern country inspired by China, following a young court lady named Maomao. She is forced to provide help to solve mysteries inside the palace with her literacy and deep knowledge about medicine and poison.

Mushoku Tensei: Jobless Reincarnation (無職転生 〜異世界行ったら本気だす〜), one of the most popular franchise in the recent past, is standing in the center of attention from Japanese and foreign fans in 2022 as well. The Isekai adventure manga has been adapted from the popular light novel series since 2014; the 2021’s anime adaptation sparked the boom of the series.

Since 33 episodes of the anime series aired, lots of fans have read this manga series for the following story. Enjoy the exciting journey of a genius magician Rudeus Greyrat, who is growing up with his family and friends!

If you are interested in the next episode after the anime ended, check which volume to start in Manga!

There are a lot of quality new anime series airing in 2021, and Mushoku Tensei is one of the most outstanding titles of […]

As the hottest Japanese manga series, quite a few people has got into the modern science fiction Tokyo Revengers (東京卍リベンジャーズ) especially since its anime adaptation was released in 2021. The ongoing action and sci-fi manga with the theme of yanki (young Japanese delinquents) has been serialized on Weekly Shonen Magazine by Ken Wakui since 2017. The latest volume of the manga series is reaching the best part, which is highly recommended to read right now.

Tokyo Revengers is set in a modern Tokyo, centering on a 26-year-old part-time jobber Takemichi Hanagaki, who becomes aware of his supernatural ability for time travel. He decides to go back in time and become a member of the Tokyo’s largest gang group known as the Tokyo Manji Gang to save his ex-girlfriend Hinata Tachibana. In addition to the passionate protagonist, you can enjoy a variety of cool yanki characters including the leader Mikey and his best friend Draken.

Did you find your next target in this article? This list of the best manga recommendations for 2022 is being updated with additional hottest manga!