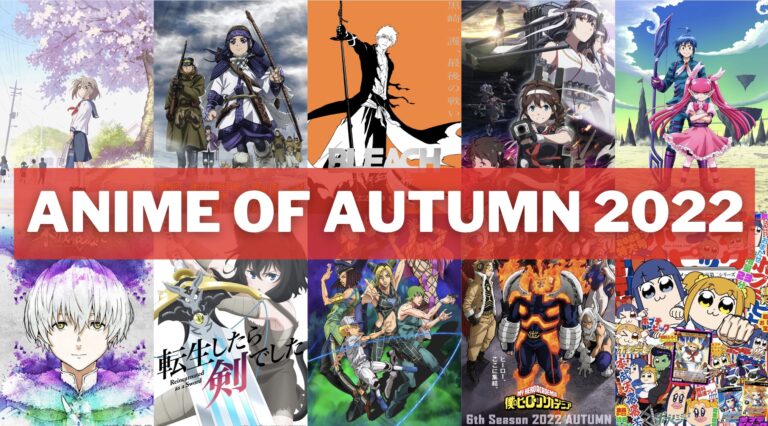 As autumn leaves are tinted in the brisk air, the world is also colored by a variety of new anime in autumn. Hundreds of fresh anime are released in a year, and dozens of new titles await you in the autumn of 2022.

You can enjoy finding high-quality newcomers from October to December including newly-started anime and sequels to current popular series. Then, which anime should you watch in the autumn of 2022?

Today, I’d like to introduce best anime of autumn 2022, ranging from the hottest action anime My Hero Academia Season 6 to the final part of the famous adventure Bleach: Thousand-Year Blood War. Of course, this 2022 autumn anime list is being updated with additional announcements, which will help you to collect the latest anime information. Stay tuned!

JoJo’s Bizarre Adventure: Stone Ocean (ジョジョの奇妙な冒険 ストーンオーシャン), the fifth season of the anime series, is adapted from the sixth part of the JoJo’s Bizarre Adventure manga series. Stone Ocean is one of the best anime of autumn 2022 and even the whole year of 2022. Its first part was exclusively released with 12 episodes on Netflix in December, 2021, and aired on TV from January to March, 2022. Additional 12 episodes are coming to Netflix in this autumn, too. You can see the sequel to the Jolyne Cujoh’s story in Green Dolphin Street Prison and check if she can save his father Jotaro Kujo and herself in the second part of Stone Ocean.

Distributed: From Autumn, 2022 on Netflix

Did you let go of the desire to watch the final part of Bleach in anime? Based on Tite Kubo’s manga series serialized on Weekly Shonen Jump between 2001 and 2016, Bleach, known as one of the most famous manga and anime series all over the globe, started its anime adaptation in 2004. After the anime series ended with 366th episode in 2012, the rest of the story is adapted into the new series Bleach: Thousand-Year Blood War (Bleach 千年血戦篇) by the same anime studio Pierrot. Don’t miss the climax of the Ichigo’s adventure in Thousand-Year Blood War, broadcasted from October, 2022.

The worldly popular action adventure My Hero Academia (僕のヒーローアカデミア) is enjoying significant momentum these days. The hero-themed manga series written by Kohei Horikoshi has been serialized on Weekly Shonen Jump since 2014, which has been adapted into the anime series by Bones since 2016. The fifth season of My Hero Academia was on broadcast from March to September, 2021, followed by My Hero Academia Season 6 in October, 2022. Entering the Paranormal Liberation War arc, the season 6 focuses on a looming all-out war between the heroes and the League of Villains. Many fans are looking forward to watching the performances of the protagonist Izuku Midoriya, his best rival Katsuki Bakugo, the No.1 hero Endeavor and other various characters.

For the fans of the popular military anime series Kantai Collection, abbreviated to KanColle, the autumn of 2022 is the keenly anticipated season. KanColle 1944 Itsuka no Umi de (「艦これ」いつかあの海で), the second series of Kantai Collection is coming in November, finally. Based on the original fleet raising simulation game developed in 2013, its anime adaptation was released with 12 episodes in 2015, followed by the first anime film in 2016. While they were made by Diomedéa, a different anime studio Engi is in charge of the second series KanColle 1944 Itsuka no Umi de.

The KanColle series represents warships anthropomorphized as teenage girls, who are called Kanmusu (meaning “Fleet Girls” in Japanese). Their characters are related to the background of the battleships in World War II. According to a key visual of the new season, it focuses on Shigure who is inspired by a Shiratsuyu-class destroyer under the Nishimura fleet, set in Battle of Leyte Gulf in 1944.

Are you keeping up with the changing trend of Japanese anime? If you are an anime fan, you can’t miss the hot historical adventure Golden Kamuy (ゴールデンカムイ), which is adapted from Satoru Noda’s original manga series serialized on Weekly Young Jump between 2014 and 2022. The first season of the anime series began in 2018 and the last season 3 ended in 2020, which were made by Geno Studio.

The fourth season is around the corder, produced by a different animation studio Brain’s Base. Golden Kamuy Season 4 continues to follow the revenge adventure of the veteran Saichi Sugimoto and the Ainu girl Asirpa, entering a new arc. The manga series just completed in the end of April, 2022, and you can expect the entire story will be adapted into the anime series.

6. Encouragement of Climb: Next Summit (Season 4)

The fourth season of the popular outdoor-themed anime series titled Encouragement of Climb: Next Summit (ヤマノススメ Next Summit) is coming in the best season for climbing a mountain. The manga series of Encouragement of Climb, written by Shiro, has been serialized on Comic Earth Star since 2011, which has been made into the anime adaptation since the first season came to audiences in 2013. The fourth season will air with each full-length episode for 20-30 mins while the past seasons were offered with 5 to 15 minutes broadcast time.

Encouragement of Climb tells the story of a fresh high school girl Aoi Yukimura, who prefer staying home to outdoor amusements. She is getting into climbing a mountain after being inspired by her active childhood friend Hinata Kuraue and her new outdoorsy friend Kaede Saito.

To Your Eternity (不滅のあなたへ) has got favorable reviews since its first season’s 20 chapters aired in 2021. The second season of To Your Eternity is made by Drive instead of Brain’s Base, the anime studio producing the previous season.

To Your Eternity follows a white orb thrown into the world, which is an existence that can transform itself into anything coping them from a stone and moss to a wolf and humans. It finally transfigures itself into a young boy who is later called Fushi. The grand fantasy story depicts his encounters and farewells with various people on the long journey.

The eccentric anime series Pop Team Epic (ポプテピピック) is coming back as its second season in this autumn. The first season broadcasted in 2018 surprised large audiences with each chapter that consists of the first half and the second half done by different voice actors. In 2021, the remixed version of the first season was aired again changing the casts, which means there are four different types totally in the one season.

Based on the original four-panel comedy web manga written by Bkub Okawa and serialized on Manga Life Win since 2014, the second season is made by Kamikaze Douga as well. Enjoy the new season of the ultimate comedy anime with interesting conversations between the 14-year-old provocative girls Popuko and Pipimi!

After 23 episodes of the first season in 2019-2020 and 21 episodes of the second season in 2021, Welcome to Demon School! Iruma-kun (魔入りました! 入間くん) is reaching its third season in October, 2022. The fantasy comedy anime is adapted from Osamu Nishi’s manga series serialized on Weekly Shonen Champion since 2017 by a Japanese anime studio Bandai Namco Pictures.

In addition to the protagonist Iruma Suzuki, Welcome to Demon School! Iruma-kun Season 3 focuses on his master Barbatos Bachiko, who has pink twin-tailed hair and is dressed in the lolita fashion.

10. Reincarnated as a Sword

Naro (Naro-kei) is one of the most popular genres in modern anime, and Reincarnated as a Sword (転生したら剣でした) is an expected Naro anime in the autumn of 2022. The Isekai fantasy anime is adapted from the original light novel written by Yuu Tanaka and illustrated by Llo, which has been serialized on the famous user-generated publishing website Shosetsuka ni Naro since 2015.

It has been adapted into a manga series since 2017 and its first anime adaptation is scheduled to air from October. The story begins when a protagonist died in a car accident and is reincarnated as a sword in an Isekai world, which is picked up by young catgirl slave named Fran.