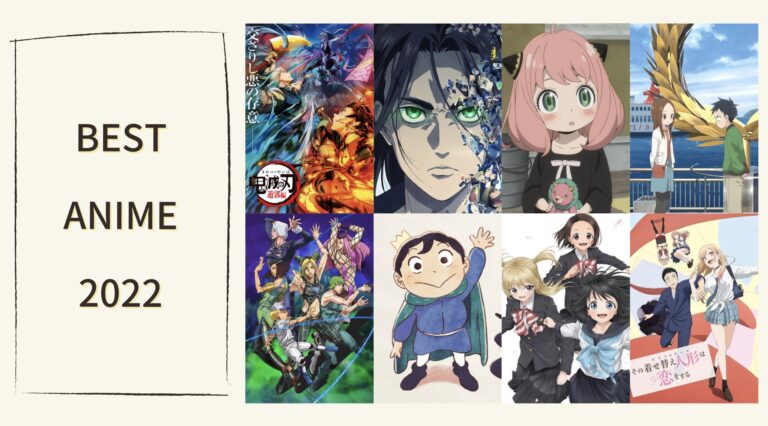 Are you keeping up with anime trends? A surprisingly large number of new anime are broadcast worldwide every year. Some under-deliver anime disappoint you; other finest works are welcomed with admiration and respect. It has become more difficult to select the best and bright anime from the pile of series.

Fortunately, there are lots of anticipated next season of the current popular anime series and newly-started television anime released in 2022. For a wide range of anime fans from beginners to experienced watchers, I’d like to introduce best anime of 2022! This anime list for 2022 is being always updated throughout the year as tens of new anime are distributed in each season consisting three months.

▽Check this out for best anime movies released in 2022!▽

Get the freshest information about the anime of 2022!

Summer Time Rendering (サマータイムレンダ) is one of the highest-quality anime airing with 25 episodes in this spring and summer, categorized as mystery and thriller. It was originally serelized on Shonen Jump Plus as manga series between 2017 and 2021, written by Yasuki Tanaka. The anime adaptation is produced by OLM’s Team Kojima.

Summer Time Rendering presents a suspenseful science fiction set in a remote island in Wakayama. A 17-year-old boy Shinpei Ajiro returns to his homeland from Tokyo to attend the funeral of his childhood friend Ushio Kofune, who just lost her life in an attempt to rescue the life of a drowning girl. However, it becomes increasingly clear that she was killed by somebody. You can enjoy the contrast between the beautifully-drawn scenery in the island and the thrilling story.

The popular rom-com series is reaching the third season as Kaguya-sama: Love Is War -Ultra Romantic- (かぐや様は告らせたい -ウルトラロマンティック-) in April, 2022, following the first and second seasons with 24 episodes airing in 2019 and 2020. It’s adapted from the steadily-running manga series written by Aka Akasaka since 2016.

Season 3 continues to present the peaceful battle between Kaguya and Miyuki, and you should check what will happen to their relationship at the school cultural festival.

10. The Rising of the Shield Hero Season 2

Many fans is welcoming the release of The Rising of the Shield Hero (盾の勇者の成り上がり) Season 2 in this spring, who have missed the Isekai dark-fantasy anime since its first season ended in 2019. The Rising of the Shield Hero has been serialized by the author Aneko Yusagi and the illustrator Seira Minami since 2013. The first season of the anime adaptation is produced by Kinema Citrus and the following season by DR Movie.

The adventure of the shield hero Naofumi Iwatani and their fellows like Raphtalia and Filo re-starts, maintainng their newly-acquired territory. Fortunately, the production of the third season has been already decided.

Spy x Family is an eye-catcher in the spring of 2022, beginning television broadcasts from April 9. The spy-themed action comedy series has been serialized on Shonen Jump Plus since 2019, written by Tatsuya Endo. And, its anime adaptation is made by a nice collaboration between Wit Studio and CloverWorks.

While the mastered spy Loid Forger executes a severe mission to maintain the balancing of Westalis and Ostania, a fake family composed of him, a skillful assassin Yor Forger and an adopted telepath Anya Forger. It depicts an exciting and humorous story with their hidden identity secrets.

Ranking of Kings (王様ランキング) has been a popular topic among anime fans since it started airing in October, 2021. The first season of the fantasy anime ended with the 23rd episode in March, 2022. Based on the original manga series written by Sosuke Toka since 2017, it is made as a part of Wit Studio’s 10th anniversary project.

A popular anime programming block known as Noitamina featured Ranking of Kings in the season. Ranking of Kings seems to be aimed at children at the first glance but actually touches even adults emotionally, presenting a growing-up story of the weak protagonist Bojji.

Lots of newly-started anime series are unveiled in 2022, and My Dress-Up Darling (その着せ替え人形は恋をする) is what you should check out to keep up with the latest Japanese anime trend if you have not watched it. My Dress-Up Darling has been serialized on Young Gangan as manga since 2018, which was first made into the anime adaptation by CloverWorks with 12 episodes airing from January to March, 2022.

The modern romantic comedy anime introduces some cutest characters including the high school heroine Marin Kitagawa and the popular cosplayer Sajuna Inui. They become enthusiastic about cosplay playing dress-up as their favorite characters of anime and games, supported by the Hina doll making apprentice Wakana Gojo. My Dress-Up Darling is making cosplay, a part of Japanese pop culture, much more well-known globally.

Akebi’s Sailor Uniform (明日ちゃんのセーラー服) is one of the best anime freshly launched with their first season, broadcasting with 12 episodes from January to March, 2022. The school-themed, slice-of-life anime is adapted from the original manga series that has been written by Hiro and serialized on an online manga publishing site Tonari no Young Jump since 2016.

Akebi’s Sailor Uniform concentrates a 13-year-old cheerful and outgoing girl Komichi Akebi, who meets many friends after entering the prestigious middle school. The beautiful drawings of the middle school girls and the countryside in the manga series are successfully reconstructed in the anime by CloverWorks.

The greatest dark-fantasy anime Demon Slayer: Kimetsu no Yaiba (鬼滅の刃) is still enjoying significant and won’t stop growing it for a while. From the end of 2021, Demon Slayer: Kimetsu no Yaiba Season 2 titled Entertainment District Arc aired with 11 episodes following the smach-hit film Mugen Train in 2020. The original manga series written by Koyoharu Gotouge was completed in May, 2022. On the other hand, the current anime series composed of 37 episodes and a movie covers only about half of the whole manga story. Many fans are excited at the intense battle of Tanjiro and the Sound Hashira Tengen Uzui with Daki, the Twelve Kizuki’s Upper Rank Six demon.

It has been announced that Demon Slayer: Kimetsu no Yaiba Season 3 (Swordsmith Village Arc) will come in no distant future, which casts a spotlight on the Love Hashira Mitsuri Kanroji and the Mist Hashira Muichiro Tokito in addition to the familiar main characters including Tanjiro, Zenitsu and Inosuke. There are also new strong Twelve Kizuki demons in the upcoming season.

After overcoming several critical incidents, the tough fight of the the Survey Corps never ends losing important members. In the latest season, the protagonist is confronted with a severe choice. A lot of mysteries about the titans are revealed throughout the recent seasons, however, it’s still difficult to predict further in the story. Stay tuned until the grand story is concluded in the next and final part.

Many anime fans will agree that Stone Ocean, the fifth season of the popular dark-fantasy adventure anime JoJo’s Bizarre Adventure (ジョジョの奇妙な冒険), is the best anime of 2022. The live-legend original manga series written by Hirohiko Araki has been adapted into anime series since the first and second part Phantom Blood and Battle Tendency was released between 1987 and 1989. Following the highly-rated seasons Stardust Crusaders (Anime Season 2), Diamond Is Unbreakable (Anime Season 3) and Golden Wind (Anime Season 4), the latest series Stone Ocean is satisfying both the current fans of the manga series and newcomers to the anime series.

Based on the original manga serialized on Weekly Shonen Jump between 1999 and 2003, Stone Ocean is made by David Production. It was first distributed exclusively to Netflix with the first 12 episodes in the end of 2021 and another 12 episodes added to the streaming site in the autumn of 2022. The anime series has not covered all part of the manga story yet, but it ‘s almost promised that it will be completed successfully. Let’s see how the female protagonist Jolyne Cujoh captures Green Dolphin Street Prison and saves his father Jotaro Kujo through to the end!

The year of 2022 is welcoming a large number of excellent anime, and you can’t have enough time to watch all of them. It’s recommended to check this best 2022 anime list at least, which is being updated as the new season comes!

▽Let’s prepare the upcoming anime of 2023 at the same time!▽